Complex shines a light on its own creation

A complex that spontaneously forms at a surface and then signals its own assembly has been created by scientists from the Netherlands. Its formation is detected by red light emitted by the complex and it could prove useful for sensing biologically-important anions.

Researchers from the University of Twente in the Netherlands combined four different building blocks which arrange themselves in a planned shape on a surface. As team member Aldrik Velders explains: ’The surface is called a molecular printboard, which is a concept we’ve developed over the last 10 years. Cyclodextrins on the surface allow supramolecular interactions when the guest groups bind in the cavity of the cyclodextrin.’ The researchers used a method called microcontact printing to create regular patterns on the solid surface.

Supramolecular interactions are weaker than covalent bonds. However, since the two components chosen by the group - an organic molecule and a europium ion bound to a chelate ligand - both have two guest groups, they become strong enough to bind the molecules in a stable way to the surface. ’In this case we carried out self-assembly using the host-guest interactions on the surface plus coordination chemistry between the carboxylic acid on the organic molecule and the lanthanide (europium ion) encapsulated in a chelate ligand’ says Velders. All these components and interactions work together to give fluorescence. 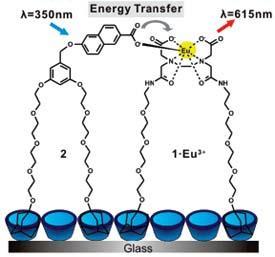 The organic molecule is needed to absorb radiation and transfer it to the lanthanide which in turn becomes excited and emits a distinctive red light. ’The fluorescence is just a tool to prove what we are doing’ says Velders, as it is only seen when all components are coordinated correctly. ’The nice thing is that we can make a job plot to measure the stoichiometry of the components using fluorescence spectroscopy and prove we have a 1:1 stoichiometry at the surface.’

As Harry Anderson from the University of Oxford, UK, who also designs supramolecular structures, adds: ’It shows you can do the same things on surfaces as you would in solution. I’m not aware of anyone doing a job plot, which is a solution-phase binding experiment, on a surface before.’

Velders hopes the system can be adapted to allow the measurement of important anions: ’We want to develop this into anion sensing systems and to determine the concentration of anions in solution by looking at the fluorescence at the surface.’