Copper signals a colourful past

Trace elements found in over 100 million-year-old fossil samples have helped to uncover the colourful past of some prehistoric species, according to an international collaboration of scientists. The findings show a remarkable relationship between copper residues and pigment within preserved feathers and soft tissue.

Tyrosinase, a copper containing enzyme, converts tyrosine to melanin - a brown/black pigment found in most organisms that dictates characteristics like hair and skin colour. The team led by Roy Wogelius, a geochemist from the University of Manchester, in the UK, found that trace elements, such as copper, were present as organometallic compounds in the soft tissue regions of ancient bird, fish and squid fossils following analysis using synchrotron rapid scanning x-ray fluorescence (SRS-XRF) - electromagnetic radiation that probes and identifies the chemical structure of matter at very low concentrations.

The team conclude that the trace elements are most likely derived from original eumelanin - the most common form of melanin. ’What we have done is nail down the chemistry of eumelanin pigmentation which is the fundamental giver of colour in the animal world,’ says Wogelius. 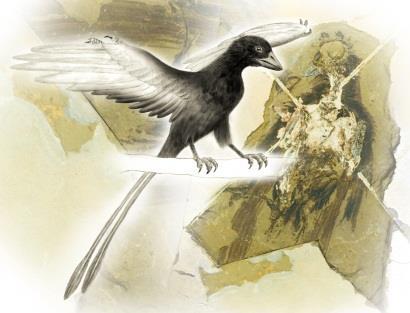 It appears that C. sanctus had a dark coloured body and lighter wings

’What we see is the presence or absence of eumelanin. By mapping the trace metals you can see that the downy body feathers, the neck feathers and the long tail feathers of the Confuciusornis sanctus [the oldest beaked bird found yet] were full of eumelanin pigment. So we know that the body and tail of that organism had to be dark in colour,’ he adds.

Wogelius explains that SRS-XRF can resolve very low concentrations of chemical structures very quickly. As the synchrotron x-rays are a million times brighter than the x-rays produced in a standard laboratory machine, the researchers were able to reveal original patterning on feathers. ’You can also scan the whole specimen, rather than small pieces,’ he says. This means that the valuable fossils weren’t destroyed in the analysis.

To confirm the link between the eumelanin residues in the fossil samples and present day organisms, Wogelius and his team compared the infrared spectra of each and found they were exactly the same. ’It is pretty compelling chemical evidence,’ he tells Chemistry World.

’It is further tentative confirmation of earlier work suggesting that there are traces of evidence from original colour preserved in bird and dinosaur feathers,’ says Mike Benton, a vertebrate palaeontologist from the University of Bristol, UK. ’The authors are clear that the concentrations could be pre- or post-mortem, but the close matching of ions with feather structure, even at high magnification, and the absence of these elements in the surrounding sediment suggest that they may be right and that some very minute chemical traces of the original biochemistry of the feather pigments are preserved,’ he adds.

Wogelius says that at present the team cannot distinguish between brighter colours like reds, blues or greens. ’But this is the first step and I think it is a pretty big step in being able to resolve shading density in fossil organism,’ he says. He explains that the next step is to use chemistry to resolve pheomelanin - the pigment responsible for the red or pink hue to the skin. ’And there is a whole richness of soft tissue chemistry preserved in the fossil record that we would like to look at.’