Cosmic rays get ahead in CLOUD

Organic chemical vapours may have a previously unimagined cooling effect on global climate. Measurements by researchers at the European Organization for Nuclear Research (CERN) show that current theories can’t fully explain how clouds form and hint that organic aerosols - tiny liquid or solid particles suspended in the atmosphere - play an important role in the process.

Clouds play a vital role in reflecting heat from the sun, making an important contribution to keeping the Earth cool. Sulfuric acid aerosols act as seeds for approximately 50 per cent of clouds. However, the mechanism by which these aerosols clump together to seed a cloud droplet is still poorly understood. The CLOUD experiment at CERN in Switzerland set out to study the effects of galactic cosmic rays (GCRs) on cloud formation. GCRs are streams of particles which originate from deep space supernovae. They are thought to play a role in aerosol nucleation by generating ions which attract polar molecules, increasing collision rates and helping these clusters of molecules grow into water droplets.

’The CLOUD experiment is aiming to settle the question of whether or not cosmic rays have a climatically significant effect on clouds,’ says project leader Jasper Kirkby, who set up CLOUD. ’To answer [these questions] we’ve built a large aerosol chamber which I believe - well, it is - it’s the world’s cleanest aerosol chamber.’ 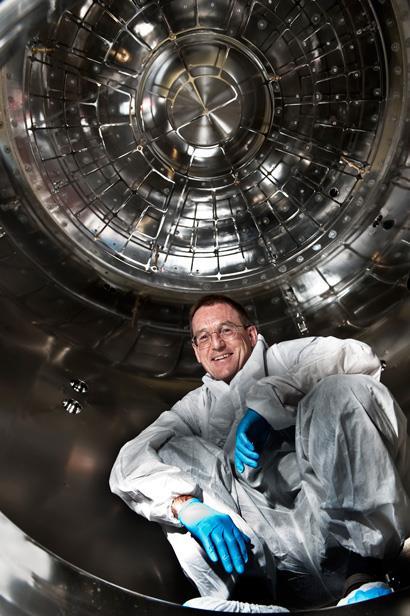 In its first ever set of experiments the CLOUD chamber was filled with ultra-pure air and trace quantities of sulfuric acid aerosols. This simulated atmosphere was then irradiated with a beam of charged pions - cosmic ray particles - from a synchrotron. Ions generated by the rays increased aerosol nucleation rates by up to a factor of 10. They also studied the effects of ammonia vapour and observed that atmospheric concentrations can accelerate aerosol nucleation up to 1000-fold.

But even with the enhancements from ammonia and ions, the experiments in CLOUD cannot explain the aerosol nucleation rates seen in the lower atmosphere. Scientists thought that these factors alone could explain cloud formation, but CLOUD has proved other vapours must be involved.

Kirkby says the only other condensable atmospheric vapours are organic compounds. He cites oxidised terpenes or organic amines - which could act in a similar way to ammonia - as likely candidates.

Scientists have studied in detail how human activity influences global warming, but humanity also contributes to cooling effects, for example releasing light reflecting aerosols. Kirkby says that aerosols are the biggest gap in our understanding of humanity’s contribution to climate change.

’I think these are quite exciting results, it’s certainly a step change paper,’ says Christian Pfrang, an atmospheric aerosol specialist at the University of Reading, UK. ’What we have here is a capability of bridging the gap between laboratory experiment and field measurement in the environment. It’s a unique facility which can address a number of controversial and longstanding issues.’

The CLOUD team will now try to identify which organic species are responsible for aerosol nucleation. Kirkby says they have already been conducting experiments which might answer this question and are analysing the data now.