The Russell Group, which represents the UK’s elite universities, has suggested that students should pay more towards the cost of university degrees. But increases in graduate debt could have unwelcome repercussions for scientific research and graduates with science degrees. 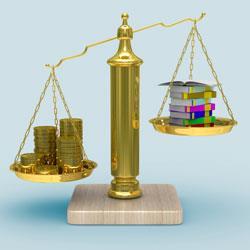 The Russell Group’s proposals could saddle students with more debt

The controversial suggestions were made in submissions to an ongoing independent higher education funding review led by Lord Browne of Madingley. In the first submission, published on 14 May, the Russell Group suggested student loans should carry a real rate of interest - as opposed to a government subsidised rate. This was followed on 17 May by publication of a further submission proposing that the cap on tuition fees be removed and replaced by a system where universities would be allowed to set their own fees.

According to the Russell Group, the current higher education funding system is ’unsustainable’ and the student loans system over generous. But student groups, including the National Union of Students (NUS), have opposed the claims. President elect of the NUS, Aaron Porter, told Russell Group chair Michael Arthur during a BBC interview that he found demands for higher contributions from students ’utterly astonishing’, highlighting that the average graduate debt in the UK already exceeds ?20,000.

Some of the worst hit, though, could be those considering lower paid professions, including research - as compared to, say, banking - and teaching. Hilary Leevers, assistant director at Campaign for Science and Engineering in the UK, told Chemistry World: ’I think at graduation or after you’ve finished a PhD, you would evaluate your financial circumstances and it seems very likely that you would factor in your projected salary and your current level of debt. There are likely to be some people who won’t go into lower paid areas, which might include academic research or science teaching.’

Students undertaking long degree programmes and PhDs could find debts piling up even as they complete their studies. But Jim Iley, director of the Royal Society of Chemistry’s science and education department, says the government ’would not sit idly by’ if this impacted on specific subject areas, like chemistry. ’The chemical sciences make a massive economic contribution to the British economy, with ?17 billion of direct and ?200 billion of indirect impacts, so safeguarding the skills pipeline is critical,’ he says.

In its second submission, the Russell Group notes that chemistry and physics are underfunded and suggests that the level of public funding should be related to the strategic importance of the subject. Thus, tuition fees for the sciences would not increase substantially. And director general of the Russell Group Wendy Piatt stresses that graduate contributions alone would not be enough to maintain the world-leading status of UK universities. ’The government must not rely on graduate contributions for the long-term sustainability of our universities,’ she said. ’Any increase must be accompanied by a commitment to maintain public investment in higher education.’