A team from the University of Michigan,US, has used co-crystallisation to combine two explosives to produce a novel compound that is safer and less likely to explode on impact. 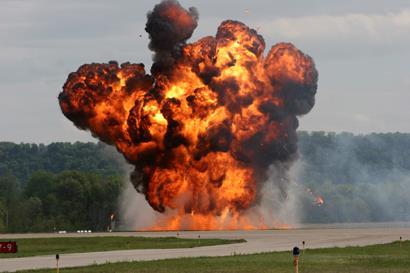 Team leader Adam Matzger says his group is the first to investigate co-crystallisation as a way to develop new energetic materials - compounds with high, releasable chemical energy. ’Co-crystals are held together in a regular repetitive pattern just like crystalline salts, such as sodium chloride,’ Matzger explains. ’But in a co-crystal, the two components are neutral. They can exist in a pure form, but you can’t have pure Na+ and pure Cl-.’ Co-crystallisation has been used with some success in pharmaceutical applications.

Now the team have combined two energetic materials in a 1:1 molar ratio: TNT and another explosive called CL-20 (2,4,6,8,10,12-hexanitro-2,4,6,8,10,12-hexaazaisowurtzitane).2 They found this combination ’after lots of trial and error’, says Matzger, who reports that the co-crystal forms readily, despite the lack of strong predictable interactions in the chemical structures of its components.

’[We have shown] that aliphatic, highly nitrated compounds can co-crystallise,’ Matzger says. ’This co-crystal forms through a series of C-H hydrogen bonds between nitro group oxygens and aliphatic hydrogens, as well as interactions between the electron-deficient ring of TNT and nitro groups of CL-20.’

He describes the co-crystal as combining the economy and stability of TNT with the power of CL-20. Although it is not as explosive as pure CL-20, it is more powerful than TNT. Its ability to withstand impact detonation is around doubled relative to CL-20.

Matzger is now in discussions with interested parties to carry out further testing. Meanwhile, his team is searching for more explosive co-crystals.

Jon Maienschein, director of the Energetic Materials Center at the Lawrence Livermore National Laboratory, US, says the work is ’a clever idea’ but questions if this is the first co-crystallisation of an energetic material. ’It is a novel approach to use neutral compounds in a 1:1 ratio like this. It’s marvellous work for a university, but they have not been able to do much characterisation, such as real detonation and safety measurements. This is a novel class of material with interesting properties but its usefulness has yet to be proven.’