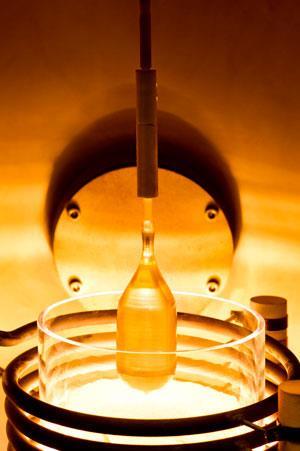 Calcium tungstate crystals, formed at around 1600Â°C, can be used to detect dark matter

German scientists hunting dark matter are set to produce half a tonne of high-purity calcium tungstate for their detectors, one 1kg crystal at a time. The CRESST-II experiment based in Gran Sasso, Italy is currently seeking this enigmatic substance, thought to explain the universe’s structure, with 10kg of calcium tungstate (CaWO4). Now Andreas Erb and Jean-Côme Lanfranchi are preparing crystals for its larger successor EURECA, which will begin operation in the French Alps in 5–10 years.

Gravitational effects suggest as-yet-unobserved dark matter in the universe outnumbers more familiar atomic matter four to one. Erb, Lanfranchi and their colleagues are hunting leading theoretical candidates, Weakly Interacting Massive Particles (WIMPs). That name reflects their size – up to a lead atom’s mass – and the limited interaction with atomic matter that makes them hard to find, or ‘dark’. ‘They have to interact weakly to agree with the matter needed,’ says Richard Gaitskell from Brown University in the US, who isn’t involved in the calcium tungstate experiments.

Erb explains that the detectors should be able to pick up dark matter particles when they hit atomic nuclei in the crystals. ‘A higher sample mass gives a higher probability of such events.’ But distinguishing the miniscule amount of heat WIMP–nucleus collisions would produce requires detectors cooled to 10mK and shielded from ambient radioactivity.

CRESST/EURECA is the only team hunting dark matter with calcium tungstate, which has two advantages. Firstly, its different atoms cover a range of possible WIMP masses. ‘No matter the mass, you always have a nucleus with a high probability of interacting,’ Erb says. Second, it would also emit light when a WIMP hits it and monitoring the different signals will help the scientists eliminate background noise.

Having initially purchased crystals, this need for extreme sensitivity drove Erb and Lanfranchi to produce their own. ‘They weren’t pure enough for the background we want,’ Erb recalls. To avoid oxidation at calcium tungstate’s 1600°C melting temperature, the crucibles are made from rhodium, with their 12cm diameter vessel costing €120,000 (£97,300). Erb says that if they can grow two or three 1kg crystals per week then they will have the required amount for EURECA in about five years.