Will 2007 go down as a vintage year for chemistry research? After consulting an expert panel of scientists and journal editors, Chemistry World reviews the important trends, and biggest breakthroughs, of the year’s published science papers.

Gold chemistry topped the organic podium in 2007. Berkeley’s Dean Toste showcased the metal’s catalytic utility throughout the year, using gold to turn simple alkene precursors into complex cyclic molecules[1], including fawcettimine - the first asymmetric synthesis of this natural product coming almost 50 years after its discovery[2]. Toste also showed gold catalysts don’t have to rely on chiral ligands for their asymmetric effects - a negatively charged chiral counterion can work even better, and can be easier to introduce (Chemistry World September p26)[3].

Gold-catalysed cyclisation also played a staring role in the synthesis of the spirocyclic A-D ring core of azaspiracid, by Craig Forsyth of the University of Minnesota[4]. David Evans of Harvard then went a step further, elegantly synthesising the whole of this highly complex, and highly poisonous, molecule[5]. Evans also made short work of salvinorin A, the most potent naturally occurring hallucinogen known, using a single-step bis-cyclisation to quickly complete the molecular skeleton from a cleverly designed precursor[6]. 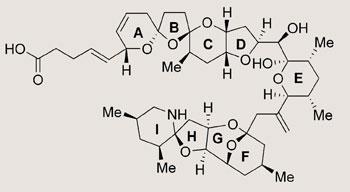 David Evans at Harvard mastered the synthesis of (+)-azaspiracid-1

David MacMillan at Princeton dramatically expanded the power of organocatalysis with his SOMO (singly occupied molecular orbital) strategy (CW May p24). The process reverses the normal reactivity of aldehydes, a common organic intermediate, so they’ll react with a whole new, complementary set of coupling partners[7]. Jeffrey Moore at Illinois showed that chemical catalysts are sometimes not needed at all, using ultrasound instead to selectively break a target bond, giving a product that had proved inaccessible using more conventional techniques (CW May p26)[8]. Meanwhile, Tim Jamison at MIT solved the long-standing mystery surrounding how nature zips together the family of marine toxins called ladder polyethers. The secret? Do the reaction in water - as nature does - rather than organic solvents (CW October p31)[9]. 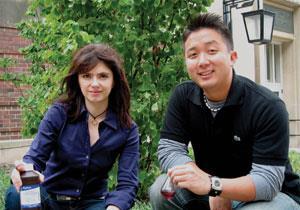 Christina White and Mark Chen, at the University of Illinois at Urbana-Champaign, made an iron C-H activation catalyst

In the bio-organic arena, Berkeley’s Carolyn Bertozzi found a way to adapt a ’click chemistry’ reaction - the highly reliable, copper-catalysed cycloaddition of azides with alkynes - to biological systems. By adjusting the structure of the alkyne component, the reaction can proceed inside a live cell in minutes, without the toxic copper catalyst[13].

Researchers studying the metabolome - the sum of all the metabolites in the body - confirmed that it is highly influenced by the microbial community in our gut. Jeremy Nicholson of Imperial College London linked changes in the microflora in Labrador dog’s guts with the long-standing evidence that restricted calorie diets produce longer lifespans (CW May p24)[14].

Following the link between trans fatty acids in fried foods and the risk of heart disease - which prompting New York City officials to ban the fats in 2006 - chemists have found a trans-fat-free way to convert oils into solid fats by turning them into a gel (CW Feb p29)[15]. In other health developments, 100 ionic liquids were tested by a team at the University of Bremen to identify which structural elements contribute to their toxicity[16]. And a recent study has become the first to confirm the suspected link between dietary acrylamide and cancer - five years after the molecule, known to be a carcinogen in rats, was detected in cooked food (p24)[17].

The argument over whether plants produce the potent greenhouse gas methane - and if so, how much - has rumbled on since early 2006. Results in early 2007 contradicted the finding, suggesting plants emitted no significant amount of the gas (CW June p23)[18]. But recent work now shows that although the herbaceous plants tested by that study produced none of the gas, seven out of nine shrub species did emit methane (p31)[19].

Elsewhere, thin was in. Japanese chemists made a flexible, paper-like, polymer-based rechargeable battery (CW April p30)[22], which could be used to power portable devices - perhaps including the bendy LEDs that John de Mello’s team at Imperial have developed as medical diagnostic devices (CW September p36)[23]. 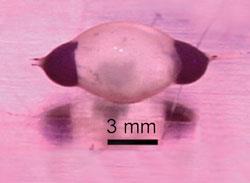 Materials don’t get much thinner than graphene, which is just a single atomic layer of carbon atoms. Andre Geim at the University of Manchester, UK, made the first practical transistors based on graphene ’ribbons’, possibly paving the way towards computer chips smaller and faster than those based on silicon (CW April p25)[27]. And graphene was also used as a detector in the ultimate sensor, able to detect a single molecule of gas (CW September p29)[28].

A major theme of the year has been the development of new computational algorithms, which has allowed more accurate theoretical studies on a variety of systems. One example came from David Sholl, whose group is currently moving from Carnegie Mellon to Georgia Tech - he used first-principles calculations to identify new hydrogen storage materials[29]. Several studies have also developed ways to predict how long-chain proteins fold up to form complex three-dimensional structures - including proteins embedded in membranes (CW August p31)[30].

Graham Cooks at Purdue University has developed a mass spectroscopy technique to quickly identify the metabolites of abused drugs in urine samples[31]. Meanwhile, analytical chemists in Ireland have also been pointing their instruments at cocaine, showing that all Irish banknotes tested had traces of the drug[32], and calculating just how much cocaine goes up Dublin’s nose by testing wastewater passing through water treatment plants (CW February p30)[33].

David Leigh, at the University of Edinburgh, UK, used rotaxanes to make a light-powered information ratchet that can be driven away from equilibrium, providing a fundamentally new type of motor mechanism for nanomachines (CW March p23)[34].

Chemists have taken a closer look at gold nanoparticles, actually peering inside using x-ray crystallography at unprecedented resolution, and also revealing the nature of gold-sulfur bonding (CW November p26)[36]. Meanwhile, Kimoon Kim of Pohang University of Science and Technology in South Korea has developed a simple, general method for making hollow nanocapsules, which can be readily surfacemodified for a range of applications (CW March p26)[37]. And a Japanese team led by Naoki Komatsu has found a way to make optically active nanotubes by extracting with chiral diporphyrin molecules[38].

Scientists have also discovered a way to grow multi-faceted platinum nanocrystals, which have much higher catalytic activity than the conventional crystalline forms of the metal[39].

2007 also saw some exotic inorganic bonds. The title of shortest metal-metal bond went to a dichromium complex with a 1.803A linkage, 0.025 shorter than the previous record holder (also a dichromium bond) which had held the record for almost 30 years (CW December p22)[40]. And chemists in Australia made the first magnesium(I) complex, a breakthrough for a metal whose chemistry is dominated by the +2 oxidation state (CW December p22)[41]. Mercury’s chemistry is also broader than was previously thought - the discovery of its +4 oxidation state compound HgF4  showed that the element is a true transition metal[42]. And after all that, we come full circle back to gold chemistry - an unprecedented complex featuring a single oxygen atom as a ligand, multiply bonded to gold, was developed by Craig Hill at Emory[43].