American researchers have used nickel nanoparticles as ’atomic-scale scissors’ to cutgraphene sheets into useful pieces. The process should give researchers access to nanoribbons and shaped pieces of this prized material, which holds great promise for future electronic devices.

Graphene is a nanomaterial consisting of atom-thin sheets of carbon, organised in a honeycomb structure that resembles chicken wire. But to unlock its full potential, graphene needs to be chopped into bite-size pieces.

’Up until now there has not been any cutting process for single-layer graphene that produces crystallographically-oriented cuts,’ says Pablo Jarillo-Herrero, lead author on the project at the MassachusettsInstitute of Technology, US. 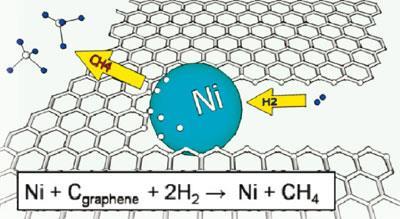 Previous attempts to cut graphene have involved plasma-cutting techniques that lack precision and leave ragged edges that can inhibit quantum effects of the material that are required for the motion of electrons.

The new process works by depositing nickel nanoparticles on the surface and then heating the material to 1000?C. This causes the nickel to undergo a thermally-activated catalytic reaction with the carbon - chewing it up and giving off methane.

’The nickel nanoparticles cut in well-defined directions through the graphene crystal lattice,’ explains Jarillo-Herrero, noting that while they usually cut in straight lines, they turn around at 60? or 120? angles when they meet another cut, so never cross over their own path.

The ultimate goal of the research is to design graphene-based circuits at an atomic-level, but at the moment the process is largely uncontrollable and results in a mixture of zig-zag shapes, triangles, hexagons, and long ribbons. 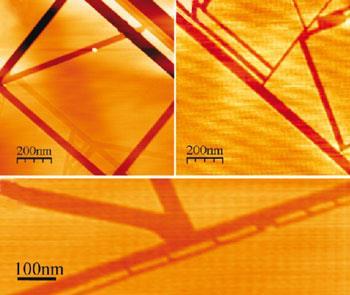 But even this jumble of unusual shapes could be very useful, says Steve Louie, who studies graphene at the Universityof California in Berkeley, US. ’Zigzag nanoribbons are predicted to possess highly unusual properties that may be exploited for nanoelectronics and nanospintronics applications - so this development greatly advances our ability to experimentally explore graphene nanostructures,’ he told Chemistry World.

Another team at Boston University, US, is also attempting to cut grapheme, led by Antonio Castro-Neto . ’This is a real breakthrough in terms of patterning graphene, but there is much still to be done,’ he says.

’The next evolutionary step will be using smaller nanoparticles with less thermal motion,’ he adds. ’Presumably then we will be able to attain the degree of precision needed to open doors to new electronic components that will be faster, more resilient, much cheaper, and will waste less energy than the current silicon technology.’