New data collected by a submersible robotic laboratory provides insights into the magnitude and potential impact of the Deepwater Horizon  oil spill in the Gulf of Mexico. The submersible identified a two-kilometre wide plume of hydrocarbons that had travelled 35km from the site of the spill and which researchers think may persist for a long time.

Richard Camilli at Woods Hole Oceanographic Institution, Massachusetts, US and colleagues analysed the data for a study published in Science. They estimate that 6-7 per cent of all the benzene, toluene, ethylbenzene and xylene (BTEX) hydrocarbons leaked in the spill are contained within the plume. BTEX hydrocarbons make up just 1 per cent of the total amount of oil released. Yet to account for BTEX concentrations of over 50 micrograms per litre, thousands of kilograms of it must have been pouring into the plume each day.

Camilli says the plume is evidence that the oil is persisting for longer periods than some might have hoped. ’Many people speculated that subsurface oil droplets were being easily biodegraded,’ he says. ’Well, we didn’t find that. We found it was still there.’ The team’s surveys suggest the plume has already persisted for months. 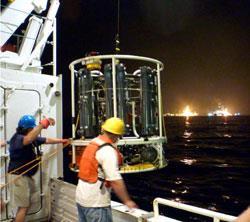 The Rosette submersible robotic laboratory being lowered into the ocean

One of the big concerns for fisheries in the short term is hypoxia - low oxygen levels - caused by bacterial blooms feeding on the oil as a carbon source. Matthew Jenny, who studies the effects of oil on marine animals at the University of Alabama, says bacteria blooms could potentially exacerbate an already recurring problem with hypoxia in the Gulf of Mexico. However, oxygen signals gathered in the study suggest that if the oil is being degraded by marine microbes, it isn’t disappearing very quickly. On the other hand, this means the oil could travel further from the site of the spill.

Jenny says scientists can only speculate about what the research means for wildlife. ’We really do not know what the impacts on wildlife are going to be and it will be a year or two before we can really start to assess the impact,’ he says. For instance, the toxic effects of the BTEX hydrocarbons the researchers focused on are only known for vertebrates and in particular, mammals. ’Far, far less’ says Jenny, is known about their toxicity to marine invertebrates.