A study into the potentially damaging mental health effects of organophosphates (OPs) may be brought to a premature close by the government’s Department for Environment, Food and Rural Affairs (Defra), after a medical and scientific review panel (MSP) questioned its research protocol. 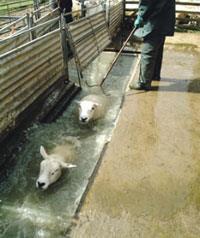 Organophosphate sheep dips are still a cause for concern

Farmers use OPs in sheep dips to counter sheep scab, a disease caused by a parasitic mite. Between 1976 and 1992 sheep farmers were obliged to use OPs, but since then their use has been optional. Critics say that farmers exposed to OPs, which are potent nerve toxins, can suffer from chronic fatigue syndrome, muscular paralysis, and a collection of symptoms termed ’dipper’s flu’.

Sarah Mackenzie-Ross from University College London, UK, is leading the threatened study which was commissioned by Defra four years ago. The team say that the study is the first to combine a thorough psychological assessment of farmers with blood tests to assess how effectively each individual can metabolise OPs.

The research programme had less than two years left to run when concerns about the selection of a suitable control group - people who had not been exposed to OPs - were raised by the MSP. The team has already recruited 160 OP-exposed farmers into the study, but in June this year the researchers were informed by Defra that their study may be shut down.

’It came as a complete shock,’ Mackenzie-Ross told Chemistry World. ’We have been in contact with Defra since the planning stages in 2000 and they approved each stage of the work.’ She subsequently insisted on a face-to-face meeting with the MSP so that she and her collaborators could defend their research. This meeting took place on 15 September, and Defra now says that it will make a final decision about the research after considering feedback from the discussion.

’The selection of a suitable control group has caused difficulties for a number of previous studies since it is not possible to find farmers who have not been exposed to the OPs,’ explained Elizabeth Sigmund, coordinator of the OP Information Network (Opin). ’Previous control groups used have included retired policemen and quarry workers.’

’We never thought that this would be a terminal problem and were surprised that they raised it,’ MacKenzie-Ross said. ’We outlined suggestions for twelve possible control groups during the meeting, all of which were rejected by the MSP, but they made no suggestions for any alternatives.’

Len Levy is the chair of the MSP, which was appointed by the government’s Veterinary Products Committee. He said that a full report of their findings will be presented to Defra, and that he could not speculate on their decision while the contents of the 15 September meeting were still under consideration.

Clement Furlong, a genetics researcher from the University of Washington, Seattle, US, and part of the research team, told Chemistry World  that the MSP had no reason to discontinue the study. ’There was some misunderstanding about our approach but we clarified all of this during the meeting,’ he said. Furlong’s team is screening farmers’ blood for genetic factors tha t could make some more sensitive than others to the pesticides. ’It is vital that this study be allowed to continue,’ he said.

Sigmund agrees. More than 800 UK farmers have contacted Opin claiming to have suffered adverse effect from OPs, and the total number of people affected has not yet been estimated, she said.

As Chemistry World  went to press, Mackenzie-Ross and her team were still waiting for Defra to decide if their work will be allowed to continue, but have not been informed how long that decision will take.