Belgian chemists are finally getting to grips with how to control the way molecules arrange themselves at the solid-liquid interface. They’ve harnessed the knowledge to make porous patterns that could be used to trap reacting molecules or impart interesting chemical, optical or electronic properties to a surface.

Presenting at the second International symposium on advancing the chemical sciences (Isacs 2) in Budapest, Hungary, Steven De Feyter from the Catholic University of Leuven explained how his group has designed combinations of molecules that can be arranged into centimetre-scale, regular patterns on graphite and gold surfaces. The pattern that forms can be regulated by tweaking the size or concentration of the molecules and the nature of the solvent they’re dissolved in or the surface they’re applied to.

The basic building blocks of the patterns are large, flat molecules with long hydrocarbon chains protruding at a variety of angles. ’We like to use big molecules because it’s easier to identify them in the final pattern,’ says De Feyter. He explains that when they are dissolved and placed on a graphite surface, they interweave to make extended porous networks. ’We can tune the length of the alkyl chains and sometimes add template molecules to control the shape and size of the pores.’ 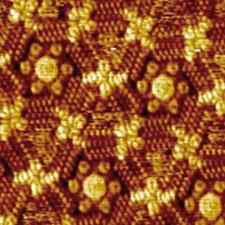 One of the key findings was the role of concentration in dictating the final pattern. ’We found that molecules with long chains, rather than forming porous structures, packed tightly into linear patterns,’ says De Feyter, ’but at lower concentration we found the lower density porous pattern was favoured, which   goes against the thinking that you need high concentrations to promote self assembly.’

Alec Wodtke from the University of G?ttingen and the Max Planck Institute for Biophysical Chemistry in G?ttingen, Germany, was impressed by the group’s combination of self assembly with clever organic synthesis. ’Historically, surface scientists have tended to work on simple surfaces,’ he says. ’The ability to make more complex but well ordered surfaces opens up lots of interesting directions.’

De Feyter hopes to create porous surfaces that respond to chemicals or light and open or close, allowing them to act as mini reactors or control adsorption and desorption of guest molecules. ’But first we need to make sure they’ll be stable when we remove the solvent and any template molecules,’ he says, ’we’re looking at functionalising the molecules so that, for example, we can cross-link them to make 2D porous polymers.’