The highest resolution snapshots yet showing how bacteria adapt to survive treatment with quinolone drugs are giving drug makers an additional weapon in the fight against antibiotic resistance.

Scientists at King’s College London and St. George’s, University of London, have shown exactly how quinolones, which are the second line of defence against diseases like pneumonia and meningitis, interact with their topoisomerase IV enzyme target. The researchers captured detailed crystal structures using high power x-rays produced at the Diamond synchrotron in the UK and its French counterpart, Soleil.

From these images the team has been able to identify the amino acids that mutate in resistant bacteria, providing vital information to drug developers. Mark Sanderson from KCL told Chemistry World that some US pharmaceutical companies have already approached his team in order to screen other antibiotics against topoisomerase IV. He says that the level of detail now available will tell these and any other interested parties immediately whether their compounds are active through the same mechanism. ’Very high brilliance synchrotron radiation is essential to attain high resolution on these new drug-enzyme complexes,’ Sanderson said.

’Researchers in the pharmaceutical industry were excited to see our quinolone-topo IV structure,’ added Mark Fisher of St. George’s.   ’It provides a starting point to understand unrelated inhibitors of topoisomerase IV that could be lead compounds for antibacterial drug development.’

The London researchers have identified how these drugs trap the enzyme on the DNA chains it is cutting. Two drug molecules bind a cleaved DNA strand to the enzyme, essentially sealing it shut. This rules out several alternative theories suggesting that four quinolone molecules combine to lock the cleavage complex together. 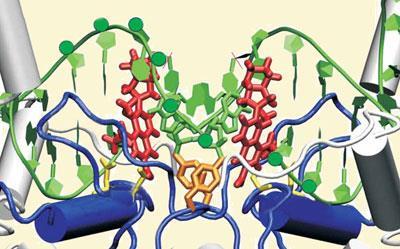 Whereas their previous experiments had produced 7? resolution images, Diamond and Soleil enabled Sanderson and his colleagues to improve that to 4?. As well as confirming exactly how quinolones exert their antibiotic effect, the crystal structures show which amino acids are altered near the quinolone binding site in drug resistant bacteria. The most frequent mutations introduce a bulky side chain into this binding pocket.

Emmanuelle Cambau, an expert on the mechanism and clinical importance of quinolones at the University of Paris, called these findings ’very important’ and echoed the hope that they could result in new drugs. ’Data should also be obtained with DNA gyrase, which is the main topoisomerase drug target in several other bacteria,’ she added.