New kit can quantify iron in blood, wine and water within 15 minutes

Spanish scientists have developed a way to quantitatively measure the amount of iron in a solution using a colour changing material and photos taken on a smartphone.

Iron is present in almost every aspect of our lives but an excess, known as iron overload, can cause significant long term effects ranging from liver damage to arthritis as a result of iron deposition in organs or joints. As such, the amount of iron in a variety of environments needs to be carefully monitored.

Unlike traditional quantitative techniques, which require removing samples to the lab for assessment by trained specialists, the new approach devised by José Miguel García and colleagues at the University of Burgos can return a result within 15 minutes. Central to the technique is 8-hydroxyquinoline, a particularly stable iron chelator, which is immobilised on a polymer disk and will change colour depending on the amount of iron chelated to it. 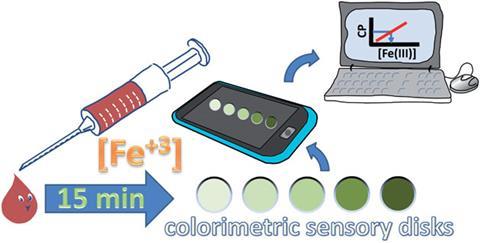 To clarify the results further, the team looked into the use of a readily available device to quantify the amount of iron present, in this case – a smartphone. García explains that ‘a conventional picture of the disks has enough colour information in the RGB [red, green and blue] parameters’. By comparing samples to reference disks (disks with known iron concentrations), the team used a mathematical technique known as principal component analysis to standardise the RGB values into a value that could be directly related to the iron concentration from the photograph. The technique was successfully used to quantify iron in water, wine and blood serum.

Leon Barron, an analytical scientist at King's College London says ‘the use of smart materials in combination with everyday mobile electronic devices for quantitative determinations is indeed exciting,’ and looks forward to the technology developing further.

The team have already demonstrated they can detect the toxic Hg(II) ion in a similar way and next they want to see if they can do the same for explosives.