Researchers from the US and Russia have shown how it is possible to measure the diode properties of a single molecule and how the orientation of the molecule between two electrodes can be controlled. The findings are a significant advance in the expanding field of molecular electronics, which seeks to construct electronic circuits from molecular-scale components, opening the prospect of a new generation of devices that are immensely powerful and efficient yet tiny.

Diodes act as electronic ’check valves’ in a circuit, permitting current to flow in one direction only through a process known as rectification. In a molecular circuit, single molecules acting as diodes would form a key component, and ensuring that the diode faces the right way is crucial.

Ismael D?ez-P?rez from Arizona State University and his colleagues selected as a candidate molecular diode an asymmetric linear molecule consisting of a pair of pyrimidinyl rings covalently linked to a pair of phenyl rings. The bipyrimidinyl moiety is electron-deficient, while the biphenyl block is electron rich. 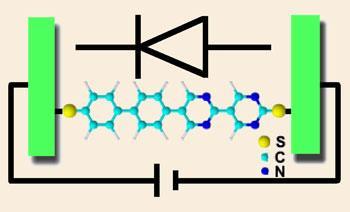 The team used an asymmetric molecule as to act as the diode, and attached each end to a gold electrode to measure its conductance

Measurements of current at the STM tip showed both that contact was made with a single molecule and that the molecule caused a significant rectifying effect.

According to team member Nongjian Tao, ’A general implication is that any molecule with asymmetric electronic properties should have a rectification effect.’

Another member of D?ez-P?rez’s team, Luping Yu, adds, ’The molecules are designed such that we can sequentially assemble them in a controlled direction. It is like a physical diode device [where] you have mark one end as positive another negative. The difference is that we used chemistry to do that.’

Richard Nichols, an expert in molecular electronics at the University of Liverpool in the UK, is impressed by the study. ’It is a very nice piece of work,’ he says. ’They have used a combination of theory, STM and single molecule measurements and have found a way to orient an asymmetric molecule at the junction. Using this strategy it is possible to place things the right way up within a molecular circuit, which is a key consideration.’