Dipstick test for plague on the way

New method for diagnosing plague could be rolled out within months 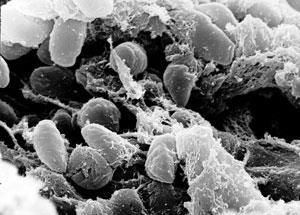 Plague could soon be diagnosed faster than ever before, thanks to scientists in Germany. The group have pioneered a new, dipstick test which will drastically cut the time it takes to spot the disease. This could save many lives in developing countries, where modern outbreaks are concentrated, and where there is little access to the labs needed for conventional diagnosis methods.

The team, from the Max Planck Institute of Colloids and Interfaces, isolated an antibody which specifically recognises and binds to the cell wall of Yersinia pestis, the bacterium responsible for plague, immediately confirming its presence in a sample. This paves the way for a test which could take minutes, according to author Chakkumkal Anish.

The idea of using an antibody to detect bacteria is not new: such devices are available for malaria and HIV, for example. Antibodies recognise bacteria by their antigens, unique markers in their cell wall, to which they bind to destroy the intruder. The challenge was to produce an antibody which specifically bound to the antigen of Y. pestis and not any other bacteria.

First the team synthesised one of the antigens of Y. pestis, a heptose trisaccharide. This was then in injected into mice, who duly made antibodies in response to the antigen. Having isolated the antibodies from the mice, they were purified and tested for their specificity to Y. pestis. These tests showed that the antibodies were good candidates for detecting the plague as they only bound strongly to Y. pestis, even compared with similar Gram-negative bacteria such as Escherichia coli and Neisseria meningitides.

Y. pestis is considered one of the deadliest bacteria in human history – it is estimated that it killed between a third and half of the population of Europe. Nowadays the three strains of plague – septicemic, pneumonic and bubonic – are all treatable with a powerful course of antibiotics, but are usually fatal if left unchecked. While recent outbreaks have not been on the scale of the pandemics of yesteryear, there are still 1000–2000 cases annually, mostly in sub-Saharan Africa and the developing world. These cases have been difficult to catch as conventional diagnostic methods rely on slow, complex and expensive techniques such as phenotyping or polymerase chain reactions, meaning blood samples would have to be sent to a laboratory. Not only are such facilities limited in isolated areas, but in many cases the time needed for such tests is all the time the disease needs to kill its victim.

‘The most important thing is that we identified a carbohydrate which is unique to the surface [of Y. pestis],’ Anish says. Over the next few months Anish hopes that the corresponding antibody can be ‘incorporated into a lateral flow device’ much like a pregnancy test kit. ‘Theoretically and practically it is possible, it is only the implementation now.’