Scientists in the US have developed a sensitive and simple sensor that could be used to detect toxic gases occurring in urban areas.

Gases such as chlorine, sulfur dioxide and ammonia are toxic and are often emitted by industrial processes and agriculture. The gas molecule structures are small and simple, which makes them difficult to differentiate using sensors. Methods to detect such pollutants in urban environments thus require expensive equipment that has to be used in a laboratory. 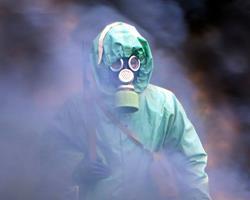 Eric Kool and colleagues at Stanford University designed a sensor based on the structure of DNA, where base pairs were replaced with one of four fluorescing aromatic monomers. The DNA scaffold gave the sensor a stable structure where the monomers were stacked over each other. Using four sensing molecules in the structures produced a pattern of fluorescence outputs that could be used to differentiate between a mixture of toxic gases.

The team made all 256 possible structures from the monomer combinations and tested their ability to detect and differentiate between eight toxic gases. They found that a combination of three of the structures could detect and distinguish between all of the gases with a range of fluorescence outputs. Kool says this work ’makes the point that a large diversity of responses can come from a small number of sensor compounds’.

The sensor is simple and shows that stacked aromatic sensors could be used to detect a variety of small gas molecules. Robert Haner at the University of Bern, Switzerland, is an expert in DNA-based fluorescent molecules and says this is ’an intriguing approach for the detection of poisonous gases’. He adds that the ’colour change profiles obtained in this simple set-up are impressive’.

The team now intends to design other sensors with DNA scaffolds for environmental and biomedical applications.