Dragonfly crystals on a silicon wafer 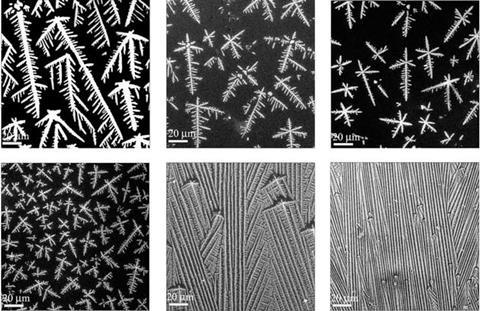 Individual, dragonfly-shaped crystals have been grown on the surface of a silicon wafer dipped slowly into a solution of dotriacontane – a 32 carbon alkane.

An international team of researchers, led by Patrick Huber from Hamburg University of Technology, Germany, used electron microscopy and x-ray diffraction to study the pattern of film growth on a dip-coated silicon surface.

Two types of crystals were observed in the film. The team discovered that the type of crystal that formed depended on the speed the silicon was moved through the solution. At slow speeds, less than 0.17mm/s, dendritic growth occurred and a dragonfly-shaped crystal was formed. But when the wafer was moved faster, at speeds greater than 0.25mm/s, a long stripe was seen that is thought to grow in a mechanism similar to the ‘tears of wine’ or the ‘legs’ that form when wine is swirled in a glass.