A study by UK scientists apparently contradicts a 100-year-old rule thought to govern the rate at which molecules cross biological membranes. The researchers have designed an electrochemical technique to study membrane transport, which they say is more accurate than previous methods.

Overton’s rule is widely used by pharmacologists because it can determine how easily a drug molecule will enter a cell. Theoretically, molecules with longer carbon chains - more lipophilic, or hydrophobic, molecules - are more soluble in fat and so make swifter progress through the lipid membranes of cells. Patrick Unwin, who led the study at the University of Warwick, says, ’Overton’s rule would have suggested that as we made the molecules more lipophilic, the rate of transport would have gone up. We found it went down.’

So far, the researchers have studied the transport of four weak acids across an artificial membrane. If their results are mirrored across other molecules and in living systems, they could impact on drug development. While some drugs may enter cells via transporter proteins in the cell membrane, many others rely on passive transport to cross the membrane. 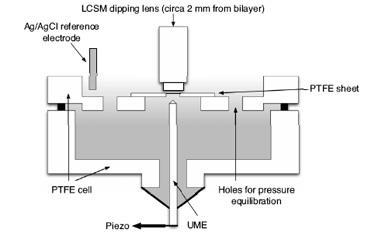 The ultramicroelectrode (UME) is held just below the bilayer

Unwin believes that these transport rates may be limited not by solubility, but by diffusion of molecules up to the membrane, and says this may explain his group’s surprising results. Scientists have traditionally used simple stirring to try to ensure molecules are delivered directly to a membrane, but this still leaves an unstirred layer of more than 100 micrometres. ’That kind of stirring is not very efficient and not very well defined,’ says Unwin. ’We’ve got rid of all the stirring and yet we can deliver reagents faster and more accurately, in a very controlled way.’

The new technique uses a tiny electrode, positioned just 20 micrometres from a model membrane, to split water. Protons produced here combine with anions to generate weak acids right next to the barrier. The researchers use a fluorescent, pH-sensitive dye to measure pH changes under the microscope as the acids cross the barrier, allowing them to estimate transport rates.

Peter Pohl, an expert in membrane transport at the Johannes Kepler University in Linz, Austria, thinks such controlled hydrolysis could prove useful in measuring transport processes. However, he says he is not convinced by the results and thinks there could be another interpretation. ’One possible explanation might be that some of the more hydrophobic molecules just enter the membrane and diffuse within it - they don’t leave and so they don’t contribute to pH changes. This could cause the difference they are describing,’ he says.

The observed effect could also be limited to the type of molecule investigated in Unwin’s study, says Ganesan, a medicinal chemist at the University of Southampton, UK. ’I think Overton’s rule, or variants of it, will apply in a lot of cases, but there will also be a lot of exceptions.  I don’t think it’s one of those hard and fast rules that people expect to be right 100 per cent of the time, or even 80 per cent of the time,’ he adds.

Stefanie Kr?mer, a biopharmacist at the Swiss Federal Institute of Technology in Zurich, also expressed doubts about the study. ’The conclusion that Overton does not rule is premature,’ she says. Kr?mer claims the study is missing an appropriate control experiment to show that the pH changes really are due to membrane permeation. She also notes that only one acid - acetic acid, the smallest and least lipophilic of the four tested - seems to be moving substantially faster than the others.

Unwin counters that if Overton did indeed rule, they would have seen a very obvious rate increase between the smallest and largest acid, and insists the trend contradicts the rule.