Despite a wave of educational reforms in the UK over the last decade, fewer school pupils are choosing to study science and maths beyond the age of 16, according to the latest State of the Nation  report from the UK’s Royal Society. And the problem is not confined to the UK: the US, according to 2006 figures from the Organisation for Economic Cooperation and Development (OECD), is also witnessing declines in the number and quality of science graduates leaving high school.

The statistics make gloomy reading for everyone concerned with encouraging schoolchildren’s interest in science - whether hoping for more and better qualified science graduates, or just seeking to improve the general public’s understanding of science.

The UK government is hardly blind to the problem. It’s introduced numerous education reforms over the past decade, and has set targets for increasing school science participation to 2014. But the evidence available suggests the wave of reform hasn’t yet driven up participation; though, as the Royal Society points out, constant reform makes it hard to work out the impact of each initiative.

The bare numbers don’t look good: there’s been a steady decline in the proportion of students taking physics, chemistry and maths A-levels over the last 12 years. Much of this fall is down to the plummeting fortunes of physics, where A-level entries dropped from 33 033 in 1996 (4.5 per cent of total entries), to 27 466 last year (a 3.4 per cent share).

By contrast, chemistry’s downward wobble has been corrected by an upturn in recent years. Its A-level entries fell from 42 262 in 1997 (5.5 per cent) to 36 110 in 2003 (4.8 per cent), but recovered to 40 285 (5 per cent) by last year. The RSC’s education manager, Libby Steele, says a greater concern at the moment is encouraging A-level students to continue to study the subject at university; many take chemistry A-level only because it is required for courses such as medicine. Noting a recent upturn in UK undergraduate chemistry applications (see Chemistry World  , March 2007, p10), she says: ’We are making progress, but still have some distance to go.’

A 2006 OECD survey that compared the scientific knowledge of 15-year olds across 57 nations suggests that UK school science doesn’t shape up too badly against other countries. Within the error margins of the study, the UK’s science pupils were placed between 12th and 18th best, above the OECD average. The US - still the world’s most important and influential science centre - was ranked 24th-35th, significantly below average.
But with post-16 participation declining, the Royal Society maintains that ’a different approach to educational reform is needed’. Experts in science education across the UK, Europe, and US agree: policy-makers need a new outlook on the purpose of science education.

The UK government, in its Science and Innovation Investment Framework 2004-2014  report, says the primary goal of science educational reform is to maintain a future supply of well-trained scientists. But education experts say that this outlook could be fundamentally damaging. The aim should be to excite and interest students in science, they say - which will as a side effect encourage more children to study science post-16.

’The real goal [of an education in science] should be to develop a sense of achievement. Whether a child decides to become a scientist or not, it is imperative that they come out feeling that their experiences of science were stimulating and worthwhile,’ says Jonathan Osborne, a member of the advisory group for 21st Century Science - a new UK GCSE science curriculum which is hoping to be a flexible model that educates both children who will go on to be professional scientists and those who won’t.

Dieter Lenzen, former chairman of the German Society for Science Education, reiterates this view, insisting that an approach that tackles relevant issues, such as climate change and renewable energy, is essential. ’The ultimate goal of science education must be to give young people a new, easy and interesting approach to science.’ 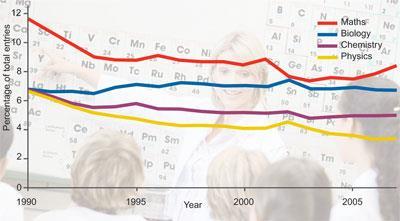 The tricky question is how to broaden the scope of science education without dumbing it down. That’s an accusation all too familiar to the UK government, whose recent reforms to GCSE and A-level science courses have been widely criticised for providing inadequate science training for those who will take the subject further.

Already, the latest UK government reform, the ’science diploma’, a system aimed at 14-19 year-olds which is set to be rolled out in three years’ time, has come under fire from education experts. Colin Osborne, education manager of schools and colleges at the RSC, worries that higher education institutions will simply view the post-16 diploma as ’a qualification for the less able’. The Science Community Representing Education (Score) - a partnership set up by organisations including the RSC, the Royal Society, and the Institute of Physics - worries that a clear separation is already taking place between the diploma and traditional qualifications. ’History shows that once such a perception takes hold, it becomes entrenched, as long as alternative courses exist with which it can be compared,’ says Score.

Consultation began in July to define the direction and purpose of the scheme but a final decision on exactly what the course will consist of won’t be made until next year. So far, discussions have emphasised the need to change teaching practices, and give children an understanding of the employment opportunities science offers them.

You tell me the answer

Jim Bower, founder of the Caltech Precollege Science Initiative (CAPSI) in California, US, says a broader science education is an effective way of creating a science literate population, not a dumbing down process. ’[A broader] science education provides children with the opportunity to critically think, analyse and communicate. Properly organised, such an education would manifest the vital skills that modern economies require,’ he insists.

Bower says that successful educational reform doesn’t necessarily require drastic changes to an existing system. ’[To broaden the scope of science education], there is no need to completely redesign the curriculum,’ he says. ’However, this is typically the first thing [education reformers] tend to do.’ Instead, he advocates moving science education to a ’hands-on’ system based on getting children to start making their own scientific investigations. That was the aim of his CAPSI project, which started in the 1980s.

Two EU-wide initiatives have already been set up to promote IBSE in European schools: Pollen, a community approach for the sustainable growth of science education in Europe, and SINUS-transfer, a German initiative to improve the competence in both maths and science subjects by training teachers in IBSE. It will be a number of years before anyone can tell whether either initiative has been effective.

In the UK, meanwhile, the RSC’s ’Chemistry for our future’ pilot scheme, supported by ?5.25 million from the Higher education funding council for England, will next year join up with similar schemes in engineering, physics and mathematics to form a national strategy intended to enthuse pupils and ensure the sustainability of higher education in science.

But these reforms won’t help much unless science teachers are also supported, point out both the Royal Society and Jonathan Osborne. ’Until UK science education gets increased numbers of quality teachers, then effective science educational reform will never truly succeed,’ says Osborne. ’[With a ?25 million investment in science centres across the UK to train teachers], there is clearly an effort by the government to achieve this goal, but with regards to teacher supply they can only be regarded as tinkering with the margins,’ he adds.

As for CAPSI, in the mid-1990s projects were running in nine districts of California, all of which were able to reduce spending on textbooks and use the savings to fund the programme. This success turned out to be the project’s downfall. With profit margins from the supply of government textbooks dwindling, the federal government stepped in and cut funding. A reminder that educational reform can’t be successful if, as the Royal Society report suggests of the UK government’s attempts, it’s ’geared to short-term political ends’.