Researchers in Sweden have more than doubled the efficiency of a dye-based solar energy device. The team say their system could be combined with more traditional Gr?tzel-type dye-sensitised cells to build doubly-active solar cells much more efficient than those currently available.

Dye-sensitized solar cells (DSSCs) were invented by Michael Gr?tzel and Brian O’Regan at the Federal Polytechnique at Lausanne, Switzerland, in 1991, and are a potential alternative to traditional silicon cells. Typically, DSSCs employ a photo-active anode, where light energy is harvested by a dye which passes electrons to an n-type semiconductor (such as TiO2) coating the anode. More recently, researchers have introduced the reverse type of solar cell, where dyes interact with p-type semiconductors (such as NiO) at a light-harvesting cathode.1

Licheng Sun and Anders Hagfeldt at the Royal Institute of Technology at Stockholm, Sweden, have now significantly improved the performance of the p-type DSSC by introducing a series of modifications. The team modified the structure of the polyaromatic dye to improve the charge separation, ensuring that the light-excited electron and the hole it leaves behind both travel around the electric circuit rather then directly recombining. The thickness of the NiO layer and the electrolyte composition were also refined.2 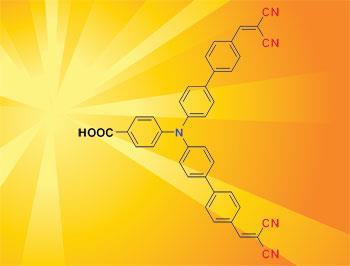 With these improvements, Sun says, the incident photon to current conversion efficiency (IPCE) of these devices has reached above 44 per cent, more than double the efficiency of previous p-type photocathodes. The next big step would be to combine the photoactive anode with the photoactive cathode to make a tandem solar cell, Sun adds.

DSSC inventor Gr?tzel praised the new work. ’The results reported are certainly extraordinary in as much as the authors have for the first time achieved a very efficient sensitization of a p-type semiconductor oxide,’ he told Chemistry World. ’This paper sets the stage for realising tandem cells, which will be particularly easy to produce as they require only the replacement of the cathode in the normal DSSC by the new photo-cathode. As a result of this new development we can expect a very significant increase in the conversion efficiency of dye sensitized solar cells.’