Electric vehicles set to charge ahead

Concerns over rising oil prices and security of supply are driving a sea change in the motoring industry with battery powered electric vehicles gradually appearing on our roads. But many technological challenges remain before the majority of vehicles on the road will be battery powered.

Two principal types of battery are used in electric vehicles. Nickel metal hydride (NiMH) batteries are largely used in hybrid electric vehicles (HEVs), where they sit alongside an internal combustion engine. These are heavy and store relatively little energy. They are useful for ’in town’ driving, where a petrol or diesel engine is uneconomical. They recharge when the car is braking, turning kinetic energy into electrical energy, or when the car is cruising on its conventional engine.

The other option is lithium ion (Li-ion) batteries, which can store far more energy than NiMH. However, Li-ion is still not good enough if electric vehicles are to compete with conventional vehicles. The main issues are the distance that an electric vehicle can travel before it needs to be recharged, cyclability - the number of times the battery can be discharged and recharged without losing significant performance - and cost.

Li-ion batteries typically have a graphite anode coupled to a lithium transition metal oxide cathode by an organic salt electrolyte. During discharge, lithium ions are extracted from the anode and moved into the cathode, releasing electrons that can be harnessed to carry out work. During charging the process is reversed. There is consensus that each component - anode, cathode and electrolyte - needs to be improved before electric vehicles can challenge conventional automobiles.

Opinions vary on the likely uptake of Li-ion batteries in the future. According to Satoru Oyama, of industry analysts HIS, global revenues from Li-ion batteries in the automotive sector will reach $53.7 billion (?34.2 billion) by 2020. Currently, the figure stands at around $12 billion. ’Lithium ion is, at present, much more expensive than alternative technologies,’ Oyama says. ’However, pricing will decline much more rapidly than the other technologies, coming close to cost parity in 2015 and then becoming the least expensive type of rechargeable battery by 2020.’

Geoffrey May, a UK based consultant to the battery industry, is more sceptical. ’More than 95 per cent of hybrid electric vehicles on the road today use nickel metal hydride batteries and that is not going to change any time soon because the main manufacturers of HEVs have invested huge amounts of money in production facilities. It is a technology that works and it is safe: there have been no reported incidents of battery fires with nickel metal hydride as have happened with lithium ion.’

’The crunch comes for all these things in terms of cost,’ May adds. ’At present, the cost of a lithium ion battery is around $800/kWh. Some people talk about getting down to half of that, but I doubt it. Even so, you are still left with a battery that will give you only 100 miles of range. I am a sceptic on the uptake of pure electric vehicles as things stand at the moment. Hybrids are likely to be much more important.’

New research on the different components of Li-ion batteries may, however, give cause for optimism. One issue is the capacity of the anode to hold lithium ions. In a Li-ion battery lithium ions must be alternately and reversibly stored in each electrode for the charge and discharge cycles. The more ions that can be reversibly stored, the greater the capacity of the battery.

Nexeon is a spinout company from Imperial College London, UK, that is developing a new anode based on silicon. ’We need batteries to store more energy, and to do that we need to start changing the chemistry,’ says Nexeon’s chief technical officer Bill Macklin. In a conventional graphite anode, lithium ions sit between the layers of the material. As a result, graphite can store around one-tenth the number of lithium ions, compared with pure lithium metal. Silicon, however, can accommodate nine times as many lithium ions as graphite. The problem, however, is degradation of the anode after successive charging and recharging cycles.

’Pushing lithium into the anode materials causes it to expand a large amount and this gradually fractures the material,’ Macklin explains. ’This is the main technological challenge we need to overcome.’

Nexeon is experimenting with novel silicon architecture to allow it to absorb the mechanical stress it undergoes during charging. One promising approach is to chemically etch low cost silicon powders to produce particles with an array of surface supporting microscopic pillars, each around 100nm in diameter and a few micrometres long. ’By having a large aspect ratio it is possible to minimise the stresses while leaving enough space between the pillars to allow them to expand,’ Macklin says.

The next phase of development at Nexeon is investigating silicon fibres that are not attached to an electrochemically inert base, as the pillars currently are. These fibres have a higher storage capacity because all the silicon is electrochemically active. Further ahead is the possibility of creating silicon particles containing a porous matrix. ’We have several different families in the pipeline,’ says Macklin. The company has raised funds to build a 250 tonne production facility within the next two and a half years.

Meanwhile, a great deal of time is being invested in laboratories around the world to improve the capacity and cyclability of cathode materials for lithium ion batteries. At the University of Illinois at Urbana-Champaign in the US, for example, Paul Braun’s group has shown that an ultrafast charging and recharging battery can be made by precisely engineering the three-dimensional nanostructure of the cathode.

’Typically in a lithium ion battery there is a trade off between high charge and discharge rate and energy density,’ Braun says. ’We have shown that it is possible to have both high power and high density.’

A good cathode material should allow efficient transport of two species - lithium ions and electrons. Conventional cathodes consist of a porous graphite matrix coated with a transition metal oxide. The graphite provides the pathway for the electrons, while the lithium ions migrate through the pores.

’This network of graphite and pores is far from optimal for efficient movement of ions and electrons,’ says Braun. This impedes the rate at which the battery can charge and discharge. Braun’s team has used a colloid as a template to create a highly porous foam of metallic nickel. The pores of the nickel foam are then coated with the transition metal oxide. The size and connectivity of the pores allows extremely rapid diffusion of the lithium ions, while the nickel walls promote fast movement of electrons. This allows extremely fast charge and discharge of the cell. ’We have shown about a tenfold improvement over the best alternative materials, and about 100 times faster than for typical materials,’ Braun says. Ultrafast charging could overcome the problem of electric vehicles’ relatively short ranges: if ’filling up’ only took a few minutes drivers might be more willing to accept more frequent recharging.

Improved electrolytes is another important goal for the next generation of Li-ion batteries. Typical electrolytes consist of solutions of lithium salts in mixtures of organic alkylcarbonate solvents. Currently, electrolytes can decompose, resulting in ’thermal runaway’, which can lead to overheating and fires. The hunt for safer and more efficient alternatives has been on for many years. One promising alternative has been discovered by a team, led by Noriaki Kamaya of the Tokyo Institute of Technology, that has developed the solid crystalline electrolyte Li10GeP2S12.

Other attempts to make solid electrolytes have been hampered by poor conductivities - usually tenfold lower than their organic solvent counterparts. The new material, however, has the highest conductivity so far seen in a solid electrolyte, and exceeds that of many liquid electrolytes. The researchers say that it shows promise in terms of fabrication, stability and safety.

’There is a big effort to improve lithium ion batteries for electric vehicles and largely the outcome will be dictated by how the consumer reacts,’ says Daniel Abraham, a battery expert at the Argonne National Laboratory in the US. ’The more that are sold, the cheaper they will become. But there are a lot of smart people out there trying to figure out the problems and breakthroughs are going to happen.’

The Nissan Leaf represents the state of the art in electric vehicles. The five door hatchback is powered by a lithium-ion battery pack and has a lithium manganese oxide (LiMn2O4) cathode. The battery comprises 48 modules, each containing four cells, providing a capacity of 24kW/h. The battery takes eight hours to recharge from empty if plugged in to a normal household AC electrical socket, or 30 minutes if supplied by a special recharging station delivering a higher DC voltage. Critics of the Leaf point to two shortcomings: the limited range of just over 100 miles fully charged and the high price - $34,000 in the US, around ?30,000 in the UK. The vehicle came in for some poor publicity when it featured on the popular TV motoring programme Top Gear  when it was shown to run out of power in a city centre with no charging point nearby. For Nissan, embarrassment turned to anger when it was revealed by the on board data logging system that the car had been delivered to the TV studio fully charged but that during the ’test drive’, which ended in ignominy, it was charged to only 40 per cent capacity - something that the presenters did not reveal. 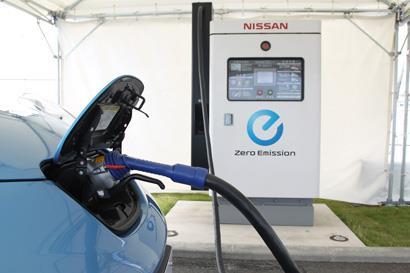