Electricity at your fingertips

Conducting polymers that could harvest energy from human body heat 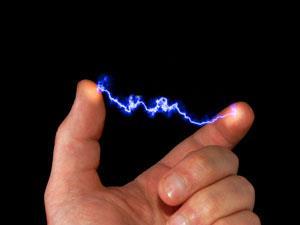 Scientists in South Korea have made a conducting polymer as part of a thin-film thermoelectric device that can generate electricity from the temperature difference between your fingertips and the environment.1

While many kinds of inorganic semiconductors have been studied, organic thermoelectric materials that are flexible and non-toxic have only recently emerged, even though they are easily synthesised, lightweight and cheap.  Such materials have the potential to be used in textiles and even turned into clothing that could use wasted body heat as an energy source.

The researchers, led by Eunkyoung Kim from Yonsei University, optimised a polymerisation and electrochemical redox process to create conducting polymers based on poly(3,4-ethylenedioxythiophene (PEDOT) with good electrical conductivity and relatively high thermoelectric properties, reporting a power factor of more than 1260 µW m-1 K-2.

‘[Kim and colleagues] show clearly another unique feature compared to inorganics: the mechanical flexibility of PEDOT. Imagine an efficient thermoelectric generator that is flexible; it could be integrated into textiles or clothes. The heating power of the human body, which varies between 7 and 40W, could be used to run low-power electronics and maybe extend the lifetime of the battery of your mobile phone.’

Kim agrees, commenting ‘Our final objective is to harvest energy from human body heat. Next we will try to fabricate a thermoelectric device in the form of a cloth or belt, taking advantage of the flexibile lightweight nature of the PP-PEDOT film. If such a device is successful, it could be used as a flexible and wearable thermoelectric device.’