US researchers have shown for the first time that a 34nm long DNA strand can be used as a molecular wire to conduct electricity. In the future, DNA could be used in nanoscale electronic computers, they say.

Consumer electronic devices are becoming smaller and smaller which means molecular wires that conduct electricity at the molecular level are of great interest to researchers. The helical structure of DNA is very similar to the pi stacked solids used in electronics as electrons are delocalised around the strands and could be used to transport charge.

Jacqueline Barton and colleagues at the California Institute of Technology in Pasadena have shown that a 34nm strand of DNA - made up of 100 base pairs - can conduct a low current of electricity without being damaged. 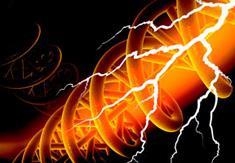 Barton explains that DNA fulfils many of the requirements of molecular wires, but also surpasses conventional wires as it is easy to synthesise and has great flexibility in design. ’In the field of molecular wire technology, DNA is right up there,’ she says. Barton’s team attached a monolayer film of ordered, upright DNA strands to the surface of a gold electrode using alkanethiol tethers. They then fixed a Nile Blue redox probe - a molecule that produces a signal when a charge transfer occurs - to the other ends of the DNA strands and submerged the circuit in a phosphate buffer solution. When a low current was applied, the Nile Blue showed that the current was flowing up and down the DNA strands, not around it.

Through cyclic voltammetry experiments Barton and her team studied the electrochemical properties of the DNA. They found that if there is a mismatch or mistake in the DNA, it will reduce the current flow by about half. ’It turns out that if you put a nick or break in the sugar phosphate backbone [of the DNA], it won’t interrupt the current flow. But if you make a break in the base pairs, the current flow is interrupted,’ she says.

Paul Barker, an expert in biomolecular electronics at the University of Cambridge in the UK says the crucial point is the way the DNA strands are arranged in a film on the gold surface. ’They are all sticking upright and closely packed which means they are less dynamic and so less likely to kink, bend or break. The close packing is keeping them rigid, providing an ideal conduit for the electrons,’ he says. ’The significance of 34nm is that it is getting into the sorts of distances that current chip manufacturers use,’ he adds.

Barton concedes that the limitation of DNA as a molecular wire is that it must maintain its helical structure and not be damaged to work effectively. ’In sensor applications this is actually an advantage, as the DNA can actually report things that are affecting it,’ she says.