After seven years of failed attempts, scientists take a detailed snapshot of a key drug receptor

US scientists have captured an atomic-scale picture of a receptor protein from a family that is the target of thousands of drugs.

The structure of G-protein-coupled receptors (GPCRs) have eluded researchers for many years. Now, a team, led by Brian Kobilka at Stanford University in the US, have used x-ray crystallography to take a snapshot of the beta-2 adrenergic receptor - one member of the GPCR family.

’The majority of hormones and neurotransmitters work through these receptors,’ explained Kobilka. ’All of them are structurally related, which means that knowing more about a specific one will advance the whole field.’ 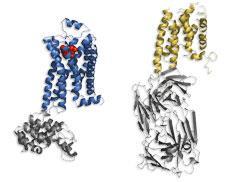 A picture of the beta-2 adrenergic receptor is finally taken

GPCRs, which float in the lipid membrane surrounding cells, have evaded having their picture taken for so long because they are very difficult to crystallise. They are floppy but also unstable in the detergent solutions frequently used to immobilise and crystallise other membrane proteins.

After working on this receptor for 20 years, Kobilka finally managed to hold it still by embedding it in a fatty layer - very similar to a cell’s lipid membrane. His group first used an antibody bound to the most unstable, intracellular part of the protein - this enabled them to take a low-resolution image.1

To take their much higher resolution picture, the team replaced this intracellular portion with a more stable protein. They also used an inverse agonist - a drug that binds to the receptor, holding it in place, in its inactive conformation.2,3

The receptor has seven segments that span the cell membrane, four of which contain a ’kink’ induced by the amino acid proline. The researchers think that these kinks enable the protein to rearrange its structure and interact with signalling molecules within the cell.

Mark Wheatley is a researcher from the University of Birmingham, UK, whose work focuses on G-proteins. ’Millions of pounds has been spent studying these receptors, in projects you will never hear about because they didn’t get a structure,’ he told Chemistry World. ’Although this is not a complete structure, this gives us a crucial new piece of information that will advance the field.’

Nearly half of all drugs prescribed in the western world work through GPCRs, he said. But despite extensive study, the structure of only one other member of the GPCR family is known - Rhodopsin - a light-sensitive protein found in the retina.

’When this was discovered, everyone thought that would start a cascade of structures,’ said Wheatley. ’But it’s a highly specialised an unusual protein. The beta-2 receptor is much more representative of a large cross-section of these receptors.’