A US company has created E. coli that can cheaply synthesise large amounts of a chemical feedstock from sugars

The researchers behind the work say it could offer a cost effective and green alternative for producing BDO and other major chemicals using a wide range of renewable feedstocks.

BDO is a well established commodity chemical. Around 1.4 million tonnes are produced each year, with a market value of $4 billion (?2.5 billion). It is used to manufacture a huge range of industrial and consumer products, including solvents, plastics and spandex. 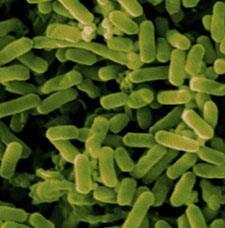 However, almost 98 per cent of the world’s chemicals, including BDO, are made from oil or natural gas, giving producers big carbon footprints and leaving them at the mercy of high oil prices. There is therefore much interest in finding economical ways to produce chemicals from renewable feedstocks.

’Genomatica’s bio-BDO is the first ever to be produced directly from renewable feedstocks - like dextrose and sucrose - without additional chemical processing steps, and at lower cost than current oil or natural gas-based BDO,’ says co-author and director of technology development at Genomatica, Stephen Van Dien. ’We estimate that the entire worldwide production of BDO could be done using less than 2 per cent of the world’s sugar.’

The team used an algorithm to predict biochemical pathways that could turn key E.coli  metabolites into BDO. They then identified enzymes in other organisms that could catalyse these steps and selected the best ones to assemble a non-natural pathway. This pathway was then expressed in E. coli that was engineered to direct carbon and energy resources to BDO production.

’This optimised strain for BDO production will certainly be a platform host that can lead to a commercial process,’ says Hal Alper at the University of Texas at Austin, US. ’The algorithm developed here for pathway and strain construction will certainly advance and influence future de novo metabolic engineering efforts and lay the groundwork for future advances in the field of industrial biotechnology.’

Kristala Jones Prather, an expert in metabolic engineering at the Massachusetts Institute of Technology, US, agrees. ’It certainly provides a lot of confidence that we can do this again and more routinely in terms of bringing bio-based chemicals to market.’

Prather is also impressed that the engineered microbe was able to produce BDO at concentrations of 18g per litre. Although this is not high enough for commercialisation, it is a significant feat because these concentrations would ordinarily kill the cell.

However, Van Dien tells Chemistry World that Genomatica has been designing organisms that can tolerate commercial-scale BDO production. ’We have already reached 100g of bio-BDO per litre.’

Genomatica expects to open their first commercial plant by the end of 2013, producing around 45 million kilogrammes of product per year.

’We are already seeing great interest in our Bio-BDO, both from existing producers of BDO, as well as customers,’ Van Dien says. ’Multiple major companies have been successfully using samples to produce downstream products and we expect to deliver improved economics to the industry.’

What’s more, the fermentation and separation processes to obtain bio-BDO are simpler, cheaper, use less energy and operate at lower temperatures and pressures than conventional petrochemical methods. ’As a result, our process plants can economically be "right-sized" to the needs of a customer or region, and be located closer to feedstock and/or customers,’ Van Dien says.

Prather, who knows the industry well, says that bio-based chemicals will soon be able to compete with petrochemicals. ’I think bio-BDO will be one of the first examples of having a direct replacement for something that’s currently available and used in large quantities as a petroleum derived chemical.’