Researchers in Japan have developed anti-gene oligonucleotides which bind more tightly to target genes, and are less likely to bind to the wrong genes.

Researchers in Japan have developed anti-gene oligonucleotides with enhanced complex stability without compromising sequence specificity. This enables them to bind more tightly to the target genes, and makes them less likely to bind to the wrong genes, and improves their control of gene expression.

Anti-gene strategies are intended to control gene expression by introducing artificial molecules that modulate DNA transcription. Kazuo Shinozuka and colleagues at Gunma University, have found that oligonucleotides can interfere with genetic mechanisms and this could prevent overexpression of critical cancer genes. 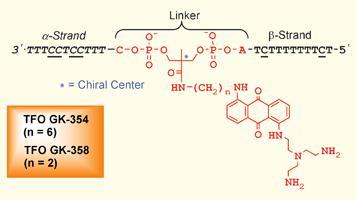 The technique relies on delivering synthetic oligonucleotides across the membrane of target cells. The oligonucleotides then form complexes with DNA recognition sequences, preventing transcription of target genes. The complexes formed have low thermal stability under physiological conditions and the required recognition sequences in target genes are relative scarce. However, ’considerable effort has been devoted towards overcoming these limitations’ said Shinozuka.

Shinozuka’s group have developed modified triplex-forming oligonucleotides (TFOs). These incorporate flexible linker regions and have significantly enhanced DNA complex stability without any reduction in their sequence specificity. They have also found that the enhancement effect depends on the length of the linker.