Austrian scientists have shown that an environmentally friendly enzyme, laccase, can be used to replace toxic drying agents in paint.

Currently, water-based paints contain heavy metals that dry the alkyd (polyester) resin films that are used as binding agents by catalysing the oxidative cross-linking of unsaturated fatty acid moieties in the films. Heavy metals are often toxic, and the commonly used cobalt-based catalysts have recently proved to be carcinogenic, and so alternative materials are being sought.

Enrique Herrero Acero at the Austrian Centre of Industrial Biotechnology, Graz, and colleagues, decided to replace the heavy metal catalysts with a laccase enzyme–mediator-based, non-toxic biocatalyst. Laccases, found in fungi, bacteria and plants, can catalyse the oxidation of mainly phenolic substances, and are already used in other fields, including the food, pulp and paper, and textile industries. 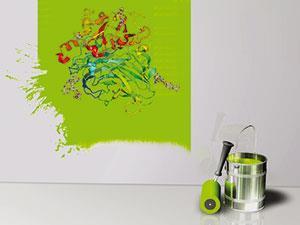 Mediators are small molecules that can be used to broaden the substrate scope of an enzyme by acting as ‘electron shuttles’ between the enzyme and substrate. Herrero Acero faced a challenge in ‘selecting the most effective mediator based on a novel rapid screening procedure’. The team used a fluorescent sensor system to measure the oxygen concentration in the film as the oxygen is consumed in the cross-linking reaction. The sensor system uses an indicator dye, immobilised in polystyrene, whose luminescence is quenched by oxygen, allowing the progress of the reaction to be monitored in both the emulsion and in the drying film.

1-Hydroxybenzotriazole proved to be an effective mediator for laccase in the oxidation of the alkyd resin, and measurements of the oxygen consumption during the reaction  showed that it proceeded by a two-phase radical mechanism, via peroxy-cross-linking. Using the novel screening technique, Herrero Acero intends to ‘search for novel mediators with higher performance and from renewable sources’.

Andrew Laws, of the University of Huddersfield, UK, and an expert in enzyme catalysis and bioorganic reaction mechanisms, says that ‘the enzyme performs remarkably well considering the environment that it is in’. He anticipates further research into the kinetics of the reaction, as it is not yet as fast as the cobalt-catalysed drying process. Both Laws and Herrero Acero expect future work to involve engineering the laccase enzyme to improve its stability and activity.