The US Environmental Protection Agency (EPA) has released its non-cancer science assessment for dioxins after nearly three decades of delays - to a mixture of responses from stakeholders. This report establishes for the first time a reference dose for dioxin exposure in the US, which could be used for regulation.

The EPA has set its threshold for safe dioxin exposure at a toxicity equivalence (TEQ) of 0.7 picograms per kilogram of body weight per day. That limit could result in tougher cleanup standards for hazardous waste sites, and more stringent limits on the amount of dioxins permitted in drinking water as well as the air. 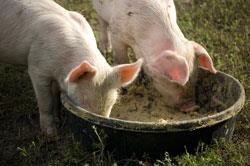 In several international incidents, dioxins have accumulated in pork products via animal feed

The non-cancer risk of exposure to dioxins - toxic chemicals that occur naturally in the environment but can also be released through forest fires, burning your trash in the backyard and certain industrial activities-was last reviewed in the US in the 1980s.

’Today’s findings show that generally, over a person’s lifetime, current exposure to dioxins does not pose a significant health risk,’ the EPA said. Its actions to reduce emissions from all of the major industrial sources of dioxins, combined with the efforts of state governments and industry, have decreased known and measurable air emissions of dioxins in the US by 90% from 1987 levels, it added.

Although the agency concluded that most Americans have low-level exposure to dioxins, it noted that non-cancer effects of exposure to large amounts of dioxin include developmental and reproductive effects, immune system damage, hormone interference, skin disorders and possibly mild liver damage.

While many in the research and environmental communities praised EPA for finally releasing this crucial part of its dioxin reassessment, the chemical industry was less welcoming. The American Chemistry Council (ACC) called the agency’s final assessment ’scientifically flawed,’ and insisted that it ’provides no defined public health benefit.’ The organisation further stated that it remains unclear why EPA would set a dioxin exposure level that is three times more stringent than other countries and the World Health Organisation (WHO) when the agency contends that current levels of dioxin do not pose a health concern.

’We are concerned that their flawed reassessment has led to an overly restrictive standard, and it is going to cause problems down the road because it will be referenced for regulatory action,’ ACC spokesperson Scott Jensen tells Chemistry World.

But others such as Stephen Lester, science director for the non-profit Center for Health Environment & Justice in Washington, DC, point out that the WHO has set a dioxin exposure level of 1-4 picograms per kilogram of body weight per day, which is not remarkably different from the EPA level. In addition, Lester notes that the WHO developed its standard in 1998, and a great deal of science has moved forward since that time. He says the EPA dioxin reference dose is based on more recent data.

’This is another example of how industry will never be happy with what the EPA has done, and this is why it has been delayed by 30 years,’ Lester states.

Arnold Schecter, a professor of environmental and occupational health sciences at the University of Texas in Dallas, agrees that there was very strong opposition from the chemical industry to the EPA dioxin reassessment for decades. ’That slowed things down repeatedly,’ he says.

But even supporters of the dioxin reassessment, like Lester and Schecter, express concern that the agency has failed to address the increased vulnerability to dioxin exposure of the unborn, as well as breast-feeding infants and adults with immune system problems.

They emphasise that sensitivity varies across the population, and fetuses and nursing children are at greater risk because their organs are still forming. Breastfed infants in particular receive a very large dose of dioxins in the fatty part of the mother’s milk, they argue.

Regarding the concerns of industry and others, the EPA says it is confident. ’EPA’s dioxin assessment was extensively peer reviewed by outside experts,’ the agency tells Chemistry World. ’This rigorously peer-reviewed non-cancer assessment updates the science and provides important new information to the public.’

The agency is expected to release the rest of its science assessment for dioxins later this year.