Exhaust emissions caught in a trap

Designed on a computer, then synthesised – a hydrocarbon trap to minimise vehicle exhaust hydrocarbon emissions 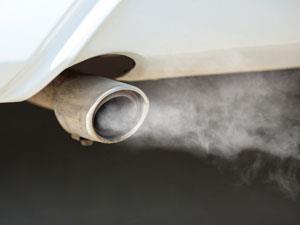 A trap that adsorbs exhaust emission gases given off during the first two minutes after firing up an internal combustion engine has been developed by scientists in Spain. It’s during this cold start period that 50–80% of the total hydrocarbon emissions are produced, they say, so the trap could minimise levels of harmful exhaust gases pumped into the atmosphere.

Current traps are made from porous zeolites. They work well for the heavy hydrocarbons in fuel, which are retained until the engine’s temperature reaches 200–300oC (the light-off temperature), at which point, they are released and oxidised to carbon dioxide and water in a catalytic converter before being expelled into the atmosphere. But lighter hydrocarbons, such as ethane and propene, desorb from the trap before this temperature is reached and escape, unoxidised.

Tomás García and Dolores Lozano-Castelló, with colleagues at the Institute of Carbochemistry, Zaragoza, and the University of Alicante, have made a trap from a multisite zeolite with specific adsorption points for each different hydrocarbon, from the heaviest to the lightest.

First, the team designed the most efficient multisite zeolite using a Monte Carlo simulation, which they used to determine the best adsorption site positions for optimal gas adsorption and retention. After making the zeolite, they ran a cold start test and saw that all the hydrocarbons were retained in the trap until the light-off temperature was reached.

‘The most efficient zeolite consists of a HZSM-5 zeolite partially exchanged with copper cations,’ says García. In this zeolite, 20% of the protons in the parent HZSM-5 zeolite are exchanged for copper cations. The copper zeolite ‘increases both light hydrocarbon adsorption and resistance to diffusion out of the zeolite during the heating process’, he adds.

‘The combined molecular simulation design–lab synthesis method, despite its many challenges, may be the best approach in designing complex materials to solve many important industrial and environmental problems,’ says Mladen Eic, who works on microporous materials and zeolite-based adsorption processes in air pollution control at the University of New Brunswick, Canada. ‘Previous attempts to obtain an effective adsorbent, for example application of the single file diffusion concept using 1D zeolites, were only partially successful at best.’

In the future, García plans to coat the zeolite onto a substrate with a honeycomb structure (either with an existing catalytic converter unit or as an additional piece), and test it under real operational conditions. He also plans to develop a catalyst to deal with the carbon monoxide that is also emitted during the first few minutes of engine operation.