The US Food and Drug Administration’s (FDA’s) advisory committee has recommended that the agency does not approve Merck’s latest arthritis drug Arcoxia, a drug in the same class as the company’s withdrawn and now infamous Vioxx.

The ruling does not bode well for the future of the much maligned class of cyclooxygenase-2 (Cox-2) selective inhibitor drugs. After Vioxx was shown to increase the risk of cardiovascular complications, the  FDA’s handling of drug safety came under fire. The agency has since ruled that all Cox-2 selective inhibitors carry amended warnings of their side effects. 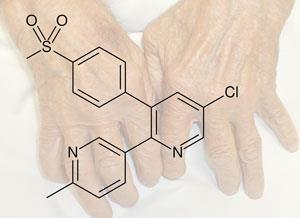 Like Vioxx, Arcoxia is an anti-inflammatory that selectively blocks the enzyme Cox-2, interrupting the biochemical pathway that causes inflammation. Traditional anti-inflammatories like ibuprofen also work by blocking Cox, but are not selective. This means that they block both of the two known types of the enzyme. Cox also has a role in protecting the mucosal layer of the gut, meaning that prolonged use of such anti-inflammatories can cause gastrointestinal side effects.

Drug companies started developing selective blockers of Cox-2 in an attempt to limit these side effects. The idea behind their development was that Cox-1 was protective, and therefore good, and Cox-2 was bad.

But this dogma no longer seems to stand up. Enzymes responsible for inflammation are also linked to blood clotting, another of the body’s responses to injury. Selectively blocking Cox-2 is thought to slightly increase the production of enzymes that cause clotting, increasing the risk of clots and the associated risk of heart attack and stroke. Selective Cox-2 inhibitors have also been associated with the gastrointestinal bleeding they were thought to help prevent.

Merck said it was disappointed by the decision and still maintains that Arcoxia is a valuable treatment option. But the committee rejected this argument. Whilst accepting that the drug had a similar risk profile to many already on the market, the panelists believed that was no longer good enough to justify approval for a new Cox-2 drug.