US researchers have used ferrofluids as liquid pistons that could be used to make adjustable liquid lenses with nearly perfect spherical interfaces for applications such as an optometrist’s phoropter. A phoropter measures the way light is focused in the eye and is used to determine prescriptions for glasses and contact lenses.

Ferrofluids are colloidal solutions of ferromagnetic nanoparticles suspended in a dispersing liquid. Ferrofluid droplets can be manipulated by a magnetic field, so they could be used in systems that need precise control, such as optics, drug delivery, and electronic devices.

Amir Hirsa and colleagues from Rensselaer Polytechnic Institute in Troy, New York, have made such a device by filling three of four holes in a substrate with ferrofluid; the ferrofluid’s surface tension allows droplets to protrude from either side of the substrate. They filled the fourth hole with 1-methylnaphthalene, a compound used as a liquid lens. They sealed the system and filled it with water, producing two chambers, with the substrate as the separator and the ferrofluid and 1-methylnaphthalene being the only connections between them. 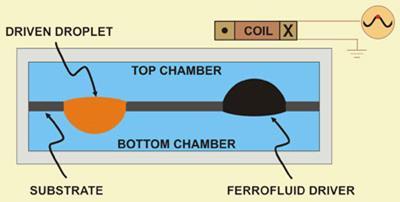 As a magnetic field was applied to the device, the ferrofluid moved further into one chamber, pushing the 1-methylnaphthalene liquid lens and changing its curvature

When the team applied a magnetic field, they were able to move the ferrofluid further into one chamber, which in turn pushed the 1-methylnaphthalene lens, changing its curvature. Capillarity - where liquid spontaneously rises in a tube because of an unbalanced molecular attraction at the boundary between the liquid and the tube - then restores the system to its original state, making a type of liquid switch. The system moves continuously like a piston and by controlling the movement of the ferrofluid, the curvature of the 1-methylnaphthalene liquid lens can be adjusted as desired.

’With the same basic elements, you could make many different things, from adaptive lenses to pumps to ways of controlling heat transfer,’ says Hirsa who was inspired ’to find natural ways of moving a system with surface tension’.

Nicole Pamme, an expert in microfluidics from the University of Hull in the UK thought the work made a nice addition to the field and particularly liked the ability to control the system remotely. ’Without any moving parts inside the device, one can control a lens quite accurately and precisely just by moving something else in a different position,’ she says.

Hirsa now hopes to optimise system integration and to adapt this technology to other materials to increase the range of applications.