Chemists watch as condensing water under ambient conditions forms as layers as ice, followed by droplets

Water molecules condensing on a surface have been ’watched’ for the first time under ambient conditions. The US team conducting the research found that the first two layers - each two molecules thick - form as ice, with subsequent layers forming into liquid droplets.

Since water is present on most surfaces, the findings could have important impacts in many fields, from understanding erosion and rain precipitation to the development of semiconductors or nanotechnology.

Determining the first atomic layers of water has previously been difficult, because at room temperature and pressure, water molecules are too weakly coupled to surfaces. Meaning that attempts to image them using high resolution atomic force microscopy (AFM), resulted in the molecules being pushed around by the probe tip.

To solve this problem, James Heath’s team at the California Institute of Technology, US, trapped very thin layers of water in a sandwich of atomically-flat mica (a silicate mineral) and graphene (a single-atom thick sheet of carbon). 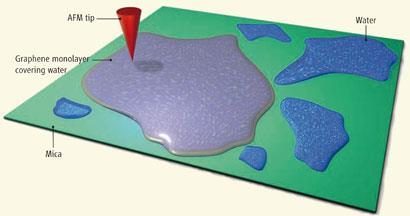 ’The graphene sheet acts like shrink wrap, keeping the water on the [mica] surface,’ Heath explains. The graphene stops the water layer moving, without disturbing its structure, meaning you can see the structure of the water beneath the graphene using AFM, he adds.

The team performed experiments under ambient conditions and varied the humidity to adjust the thickness of water sticking to the mica surface. ’The first two layers of water, each two molecules thick, are very clearly ice. Beyond that, the water forms liquid droplets,’ Heath says.

But the research goes beyond the study of water, as the same process could be used to examine the behaviour of other solvents and surface materials - as long as the materials are atomically flat.

Andre Geim, who first discovered graphene at the University of Manchester, UK, is impressed by this application of his material. ’Everything is covered with water, so this is an incredible breakthrough for people working with water absorbates on surfaces. The opportunity to visualise solid ice is surprising and the process has great potential.’

’This is a creative and exciting advance that might have quite broad applications for adsorbate structure determination,’ says Richard Saykally at the University of California at Berkeley, US.