US chemists have forced molecules to react by ripping their bonds apart with ultrasound.

US chemists have forced molecules to react by ripping their bonds apart with ultrasound. Wanton destructiveness this wasn’t: like cold-blooded torturers, the scientists carefully stretched one targeted bond until it snapped, guiding the molecule’s subsequent reaction into pathways forbidden by conventional chemistry.

Jeffrey Moore and his colleagues from the University of Illinois at Urbana Champaign, US, show that where light, heat, catalysts or electric fields fail to kick-start a required reaction, mechanical force could do the job instead. Moore’s team used ultrasound, which creates storms of bubbles that rapidly collapse, making intense shockwaves. Put long polymer chains into this maelstrom, and their centres rupture due to the shear forces exerted on each end. 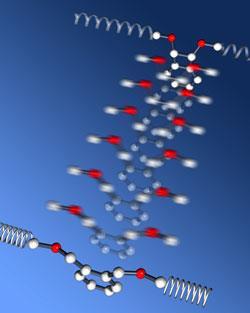 ’The idea is fairly old - it’s been known since the 1950s - but it was restricted to just tearing bonds apart, with no controlled reactions,’ Moore explained. His team hoped to harness that ultrasonic force by attaching long polymers either side of a molecular bond.

After several failed attempts, the chemists struck lucky with benzocyclobutene: a benzene ring with a cyclobutene square fused along one edge. Ultrasonic tugging on polymer handles fastened around the far side of the square ripped the carbon-carbon bond apart.

Though this demonstrated that mechanical force could be focused onto one bond, it wasn’t particularly useful. After all, the same bond can be fragmented by both light and heat via well known electrocyclic ring opening chemical reactions.

But there was an unusual twist: the products of the reaction flouted the established principles of ring-opening reactions (the Woodward-Hoffmann rules). These demand that opening up two different cyclobutene isomers (differing in the relative orientation of their side groups) by heat or light should give two different isomeric products. But when hauling on the polymer pump handles, both cis and trans isomers of the cyclobutene gave the same isomeric diene product, a heresy confirmed by NMR.

’This paper reports a beautiful and quite unexpected result.  It’s one of those wonderful cases where intuition based on how the macroscopic world works trumps what an expert in molecular reactivity might expect,’ commented Stephen Craig, of Duke University, North Carolina, US.

Moore suggests that as the stressed bond is stretched, the molecule’s electrons assume a new configuration, allowing them to travel through previously forbidden reaction pathways; though it’s unclear what is actually happening.

The ultrasound approach could find use in any reaction where a change in molecular geometry would be eased by deforming bond angles or stretching bonds, said Moore. ’We don’t know if this is a one-shot deal or if it will be applicable to your favourite organic reaction,’ he admitted. But he hopes that by kitting out molecules with ’mechanophores’ - bonds that react predictably to mechanical force - chemists may eventually make materials whose reactivity can be triggered and controlled by stress.