A team in the US has developed a detection system that crime scene investigators can wear on their fingertips to rapidly identify suspected traces of explosives and gunshot residue.

With the increase in crimes related to explosives and firearms, fast and accurate detection of possible traces of explosives and gunshot residue is of considerable importance. Forensic analysis is typically carried out in a central laboratory, requiring time-consuming sampling, transportation and storage. Joseph Wang and colleagues at the University of California, San Diego, have built on their expertise with wearable sensors to move forensic analysis away from the lab and to the crime scene. 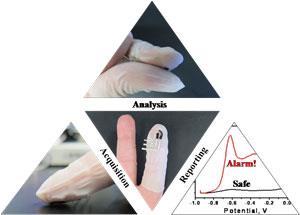 Their new sensor is made up of two components: an electrode screen-printed onto a stretchable sheath worn on the index finger and a second sheath, worn on the thumb, coated with a solid-state ionogel electrolyte. ‘Initially we intended to use a hydrogel, but the lifetime of this media was finite due to evaporation of water,’ says Wang. The ionogel circumvents the need for carrying additional liquid reagents, making the device highly portable.

To sample a surface, the investigator simply swipes with the index finger and presses together with the thumb, completing the electrochemical cell. A field-portable electrochemical analyser then reads the voltammetric signal, showing distinct peaks for gunshot residue (GSR) and trace explosives. The entire process only takes four minutes. They tested out their forensic fingers on a number of objects around the lab before taking them into the field to detect GSR at a local firing range.

Magdalena Wajrak at Edith Cowan University, Australia, who also investigates electrochemical methods to detect GSR, says ‘currently forensic investigators need to collect many samples for analysis by scanning electron microscopy, which is both time-consuming and costly. On-site screening could eliminate the need to collect so many samples, reducing time and cost.’

The team hope to develop their sensor by integrating the electronics in the form of a wristband, a wristwatch, or even a ring. Wang adds that ‘with the rapid development of wireless communications, the transmission of results to a smartphone or centralised database would be of substantial utility to on-site forensic investigations.’