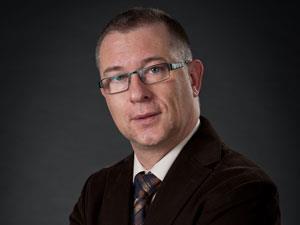 Frank Vanhaecke is a professor of analytical chemistry at Ghent University in Belgium. His research encompasses the determination, speciation and isotopic analysis of trace elements using inductively coupled plasma-mass spectrometry (ICP-MS). He took some time out from the 2013 Goldschmidt conference to talk to Rebecca Brodie.

What inspired you to become a chemist in the first place?

That’s an easy question. When I was in secondary school I knew that I wanted to do something in science. At first I had my mind set on biology. Questions like ‘how do animals and plants defend themselves?’ and ‘why do trees lose their leaves in autumn?’ intrigued me. But I quickly gave up on this idea when I had to do my first dissection – that was the end of biology for me.

I had a very inspiring chemistry teacher at secondary school who made me realise I wanted to do something chemistry related. At that time we had to sit a final exam to determine if we could go on to higher education. We could pick the subject of the exam, so I picked chemistry. Afterwards he spoke to me about my study plans: I wanted to do either chemistry or pharmaceutical sciences, but he advised me to select chemistry. I must admit I only thought about what I would like to study for the next 4 years, and didn’t think too much about the career that comes afterwards.

It can be quite difficult thinking that far ahead and knowing what kind of a career you want.

Yes many people that I have talked to have selected their field of study with only the study topic in mind, and not thought about the career to follow.

Why specialise in trace element analysis?

Well that is a funny story, because after my second year of my undergraduate degree I ran into the chemistry teacher I mentioned before. At this point I still had one more year to come up with a thesis topic and area of specialisation. He asked me if I already had a topic in mind, and I replied ‘not yet, but definitely not analytical chemistry!’ That was just after a lab session consisting entirely of titrations and gravimetric analysis. In third year we had practicals in instrument analysis. It was at this point that I realised I had one of two choices; either synthesis – “cooking” – or working with instruments – “pushing buttons” – and I decided I was better at pushing buttons.

I came to a very similar conclusion myself during my undergraduate degree.

I caused a couple of small fires during practicals. At around the same time Ghent University had just acquired its first ICP-MS instrument – I was attracted to the new technology and that’s how I ended up working on trace element analysis.

Your work covers many fields – geology, biology and archaeology. Is it difficult to specialise in one field and still have a broad understanding of many others?

So that is actually the strategy of the group. We have all types of ICP-MS instruments and work on elemental, speciation and isotopic analysis. We try to apply our knowhow to several different fields. It always takes a while when we start in a new field to get acquainted with the terminology and identify the research questions that we can address. So some fields are easier than others, for example pure geology is still extremely difficult for me because of all the ore formations, diagenesis processes and so on.

Do you ever contact other researchers in other departments for help?

Yes, absolutely. Practically all of our work is interdisciplinary. For example, if we are working in geology there is typically at least one geologist involved. It’s the same with research in medicine and archaeometry. It can be quite fun to get immersed in these other subjects because it gives you a broader overview. It’s great to see how the students react to the research too. In our group, for instance, for isotopic analysis, a student will be isolating the target element chromatographically, and measuring the isotopic composition with MS. But they select the topic for which the context is interesting for them. So if someone is looking at elemental composition of and target element isotope ratios in blood, it is because they have an interest in medicine.

You are currently the chair of the JAAS editorial board. What direction do you see this research field moving in? What do you imagine will be the next big breakthrough?

I have changed my mind over the years about what I think the next big breakthrough will be. In the field of atomic spectrometry, in the 1960s there was AAS [atomic absorption spectroscopy], the 1970s saw ICP-OES [Inductively coupled plasma-atomic emission spectroscopy], and then in the 1980s ICP-MS was introduced. I originally thought this was going to continue, and there would be a completely new spectroscopic technique every 10 years, but this was not the case. For the kind of research we are doing, the most important recent introduction was that of multi-collector ICP-MS, although from a principle point of view, this might already be considered a special type of ICP-MS rather than something entirely new.

I now see an evolution of what we already have, rather than completely new things. I think there’s been a bit of stagnation in the field, but we are now starting to get away from this with some important developments. I’m also quite impressed with recent advances in synchrotron x-ray techniques, and their ability to image with far greater detail. The advance in speciation in solid samples is impressive as well. These are all amazing steps forward. I also like to see how all of these techniques are being applied to many different fields. In JAAS we see many different applications.

Whose work do you think is really exciting at the moment?

One of the applications I’ve recently enjoyed reading about is the work being done on art analysis, and looking at what lies behind the paint on the canvas underneath using x-ray techniques. This is work from Koen Janssens at Antwerp University in Belgium. It’s not only sound science but very entertaining to read about. There is also important instrument development in x-ray analysis. In every paper you read you can see how the spatial resolution has improved.

Also the extension of the use of isotopic analysis beyond its more traditional application in geo- and cosmochemistry is fascinating.

And there is the work by Detlef Günther’s group, which never stops amazing me. His “in air” laser ablation is astounding. Instead of having the constraints of a sample chamber with given dimensions, he can ablate samples in air, so there are no restrictions in sample size or shape. Recently his group has also come up with a portable device, so he can go to the museum, rather than needing the object brought to the lab. And the method is practically non-invasive.

What advice do you have for young scientists just starting their careers?

What I see is that people who really like what they are doing are the ones that become really successful. People who see a PhD as a 9 to 5 job don’t seem to get the same fulfilment out of it as others do. If you love what you are doing then that is a great reward. 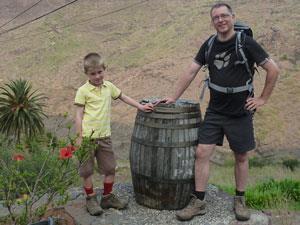 Frank with his son

Conferences are a good place to start. By listening to colleagues from other fields and finding out what challenges they have, sometimes you can come up with a solution for them. This is a really good way to start collaborations.

What do you do in your free time?

I like to travel, so at least twice a year I take some time off to travel with my family. I also try to spend time with my son. He’s nine so still thinks it’s ok to hang out with his father. We often go to the movies or go cycling.

If you weren’t a scientist, what would you be?

Like all young boys, I might have said a policeman or firefighter once or twice, but I clearly remember that for a long while I had my mind set on becoming a rock star. I started buying music at the age of seven and listening to various types of music, ranging from 1950s rockabilly to hard rock. Heavy metal still gives me great pleasure. For a very short while I was the drummer of a punk band in my early twenties, but we split up after only a couple of sessions. I guess that becoming an analytical scientist was as close as I could get to hard rock(s) and heavy metal(s).