As researchers strive to turn plant waste into ethanol fuel, US scientists have developed a simple chemical process to convert cellulose to furfural molecules - an alternative biofuel source. The technique has only been tested on bench scale but could make furfural fuels from a range of cellulosic materials, including waste from forestry and the food industry, and even newspapers. 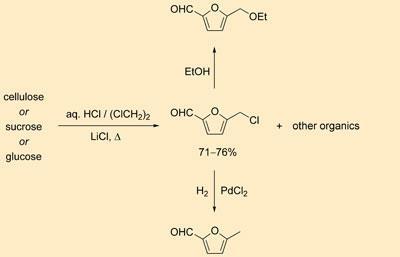 Cellulose can be directly converted into furanic biofuels in high yields

Mark Mascal and Edward Nikitin of the University of California, Davis say their method produces furfural fuels from waste cellulose in very high yields. Their main product, the organic liquid 5-(chloromethyl)furfural (CMF), can be converted in one straightforward step to ethoxymethylfurfural (EMF), a potential diesel additive.

Mascal says furfurals are a better option than cellulosic bioethanol, as the number of different treatments required in bioethanol production makes the process uneconomical. ’It’s certainly cheaper to make furfurals,’ he says. ’We use nothing more sophisticated than hydrochloric acid. So you’re not using enzymes and pre-treatments [to break down cellulose], or doing detoxification or fermentation.’

The researchers digest cellulose with concentrated hydrochloric acid containing lithium chloride, and using dichloromethane extract CMF, together with other furan-based organics. The CMF can then be converted into the furanic product, EMF, which has shown promising results when tested in diesel blends by the Shell spin-off company Avantium.

However, because this conversion requires ethanol, Mascal thinks it might be preferable to carry out an alternative conversion - a catalytic hydrogenation to 5-methylfurfural (MF), an as yet untested fuel. ’Hydrogen is easy to get hold of, at least in relatively small quantities, so if we can get away from ethanol completely, I think we might be better off,’ he says.

’I am sure these conversions can be effectively done in the laboratory, but there’s a world of difference between doing a litre of something and buckets of something,’ points out Arthur Ragauskas, an expert in biofuels at the US Department of Energy’s BioEnergy Science Center. He also thinks that eliminating chlorine, which in the final product can cause corrosion, could present a problem in any industrial scale version of the process.

Mascal admits that the level of chlorine, although low, will need to be reduced further. However, he says he is confident this won’t be a stumbling block. ’Right now this is science at the bench, but if anybody is ever going to really use this, engineers should be able to develop processes that ensure that chlorine and any other contaminants aren’t going to be there.’