Chemists in Germany have created a glass microchip that combines microfluidic channels with a nanospray emitter for electrospray ionization mass spectrometry. The device enables the coupling of microchip electrophoresis and mass spectrometry with nanolitre samples and no dead volume (the volume of mobile phase that exists between the point of injection and the detector).

Mass spectrometry is now a key technology for high-throughput analysis of biomolecules. While the analytical side of the method depends on large equipment, the input side can be miniaturised. Recently (9 May 2007), Chemistry World  reported the development of multiple electrospray nozzles arranged on a single silicon chip. Now, Detlev Belder and colleagues at the University of Regensburg, have developed a glass microchip that directly couples electrophoretic separation techniques with the electrospray process. 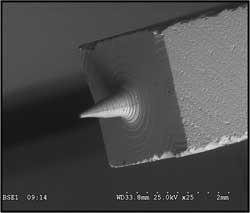 To test the new device, his group performed an on-chip enzymatic digestion of the protein BSA (bovine serum albumin), followed by electrophoretic separation of the resulting peptide fragments and their identification by mass spectrometry. Checking the resulting pattern of peptide masses against databases, the researchers could confirm the identity of the protein used. ’In the near future, nanospray chips could be implemented as mass-spectrometric couplers of complex lab-on-a-chip systems,’ predicted Belder. ’Particularly to integrate chemical synthesis with subsequent analysis of the products on a chip.’

Several mass spectrometrists contacted by Chemistry World  concluded that existing solutions to the coupling of nanospray mass spectrometry with separation techniques were satisfactory. ’The topic has been around for 10 years and has been solved,’ said one expert who did not want to be named.

But Uwe Karst, chair of analytical chemistry at the university of M?nster, Germany, welcomed the new development enthusiastically: ’This is an exciting piece of work, because the authors constructed, with simple means, a microchip with integrated nanospray emitter, which has no void volume at all.’ He added: ’This certainly is an important step towards the more widespread use of mass spectrometric detection coupled on-line to microchip reactions and microchip separations.’

Steve Haswell, professor of analytical science at the University of Hull, UK, agreed that the integration of microfluidics with electrospray mass spectrometry is now as one of the ’must have’ features of this important and growing area of science.

’[Belder and colleagues] describe an elegant yet simple way of moving a step closer to this Holy Grail,’ said Haswell. The work ’heralds a significant step forward in moving towards a fully integrated miniaturised process/detection technology.’

Enjoy this story?  Spread the word using the ’tools’ menu on the left.