Genetic testing? We've got an app for that

US scientists have developed a device dubbed Gene-Z for point-of-care genetic testing using a smartphone interface that has realistic commercial potential.

The device, made by Robert Stedtfeld at Michigan State University and colleagues, is cheap, with an estimated manufacture cost of less than $350. It’s small, about the size of a tablet computer, and weighs less than a bag of sugar. And, you can operate it via an app on a smartphone. 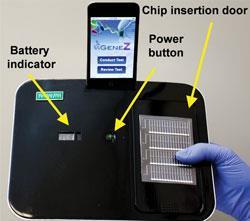 The team’s prototype consists of a disposable plastic chip with four arrays containing the dried primers required for a genetic assay, allowing parallel processing of four samples with multiple genetic markers for accurate disease diagnosis. The chip sits in an aluminium heater bed, through which LEDs are fed for real-time optical detection, and the whole thing is encased in sleek black packaging with a dock for an iPod Touch or iPhone.

Holger Becker, co-founder of microfluidic ChipShop, Germany, is impressed. ’I like it for a couple of reasons,’ he says, ’it’s not over-engineered, it addresses a couple of very typical problems in a point-of-care diagnostic device and there is a simplicity in the approach, especially in the detection system.’

The team made two major changes to existing designs, explains team member Syed Hashsham. First, they made the disposable microfluidic chip from polyester, rather than the more traditional silicon or polydimethylsiloxane. Hashsham says he was inspired by ’kitchen chemistry’. If plastic food bags can be sealed to keep your sandwiches fresh, he reasoned, then plastic membranes in the chip would stop samples escaping during loading. This avoids the need for mechanical valves and the plastic chips are easy to design and fabricate. You can think one up in the morning and use it in the afternoon, he says, whereas silicon chips take weeks to develop.

Second, the team rejected polymerase chain reactions (PCR) in favour of the loop-mediated isothermal amplification (LAMP) assay. The LAMP assay requires no thermal cycling, requires cheaper optics for detection and is robust - as opposed to PCR, which Hashsham describes as ’finicky’. Finally, they used WiFi and a smartphone with a custom-built app as the interface to manage data from the device.

Using WiFi does throw up a couple of problems, however: the safe transmission of potentially sensitive patient data via a wireless network, use in hospital settings where signals can interfere with other equipment and viability in areas without an internet connection. Stedtfeld and his team are working with other groups to address the encryption and interference issues. They say that their next step is to make the Gene-Z device compatible with an ordinary mobile phone, so that information can be transmitted via SMS and, by adding solar cells, the device could be used in rural settings.