Germany’s agriculture minister Ilse Aigner has been under fire from EU scientists following a series of decisions regarding the cultivation of GM crops in the country.

In late April, Germany approved cultivation of BASF’s genetically-modified potato, Amflora, just weeks after banning cultivation of a strain of genetically modified maize. The ban triggered sharp criticism from German scientists and the European agrochemicals industry, who described it as a setback to scientific GM research and its commercial exploitation across Europe.

While many scientists and other GM proponents are pleased that Amflora, a potato genetically modified to produce pure amylopectin starch for technical applications in the paper, textile and adhesives industries, has received the green light, they also suggest that the approval is evidence that Aigner’s controversial ban of Monsanto’s GM maize MON810 on 14 April was politically - not scientifically - motivated.

Aigner announced the immediate ban of MON810 - a pest-resistant corn crop that was approved by the EU in 2004 - saying she believed there were ’legitimate grounds to accept that genetically modified corn from the MON810 strain constitutes a danger to the environment.’

However, Aigner failed to justify the ban on the basis of solid science, says Nathalie Moll, director of green biotechnology of Belgium-based EuropaBio, the European association for bioindustries. The European food safety authority (EFSA), Europe’s top licensing authority, has expressed no reservations about cultivation of genetically modified maize, she says. 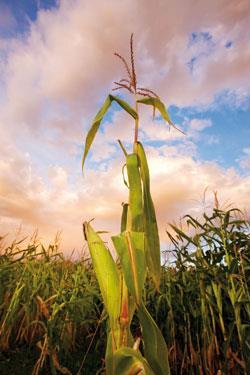 Scientists sharply criticised the German ban of a GM maize

Monsanto attempted to suspend the government ban through the courts in time for the 2009 planting season, but the firm’s petition was rejected by the Braunschweig administrative court in Germany. The company can still appeal to have the ban permanently reversed.

’We can imagine that [Aigner’s] decision was a political action related to upcoming European parliamentary or national German elections,’ Moll says. Despite being given the green light by the EU, the crop has already been banned in France, Austria, Hungary, Greece and Luxemburg.

Moll adds that the European bioindustry is particularly concerned that the ban is a complete reversal of earlier rulings in Germany, as GM maize cultivation had been allowed since 2005 with planted areas increasing each year.

Mette Johansson, spokeswoman for BASF Plant Science in Ludwigshafen, told Chemistry World  that in order to gain approval for Amflora, the company reduced its original cultivation plans to a trial area of 20 hectares surrounded by a fence, down from original plans for 155 hectares, and limited to a single site in the eastern German state of Mecklenburg-Western Pomerania instead of several locations.

Andreas Thierfelder, director of public and government affairs at Monsanto’s German subsidiary, says: ’While we are obviously disappointed with the MON810 ban, we are pleased for BASF and farmers that test cultivation of Amflora potatoes was approved.’

Aigner’s decision to ban the Monsanto maize was criticised by colleagues in government, particularly research minister Annette Schavan, who voiced support for GM research. Chancellor Angela Merkel, who initially remained in the background after Aigner’s MON810 decision triggered protest from German scientists, called for a calmer GM crop debate and suggested her fellow centre-right political party members should be open to agricultural biotechnology. She also noted that companies have invested heavily in development of GM crops, a fact which ’cannot simply be ignored because currently sentiment is hostile,’ Merkel was quoted as saying.

Ricardo Gent, executive director of the German Association of biotechnology industries (DIB), a division of the German Chemical industry association (VIB), sees the ban having two prime negative consequences. The first is that companies will ’invest in biotech crop research and development outside of Germany and partially outside of Europe, and Europe then will have to import the resulting products’. The other negative impact is in the campaign to win public support for GM. ’Aigner’s decision has the serious knock-on consequence of eroding public confidence in the scientific evaluations of EFSA as well as in the science-based approval process itself,’ he says.

Germany’s 10 leading scientific organisations, including the Max Planck and Fraunhofer societies, the Helmholtz and Leibniz associations and the German research foundation, also joined the fray following the ban, issuing a joint statement describing ’green genetic engineering’ as an important technology for the future, and calling for roundtable discussions between scientists and politicians on how to best proceed in Germany with GM crop research.