Getting a look at water wires

Indian chemists have trapped tiny strands of water inside peptide nanotubes - allowing the researchers to take a direct look at how small amounts of water behave in a confined environment. The research should improve predictions of how water molecules line up in nanotubes or biological channels - helping with future designs for fuel cells or medical treatments.

Water behaves differently at the nanoscale, forming into single-file arrangements known as ’water wires’. These are important in biology as they ferry protons through cell membranes, which is a crucial step in how most organisms produce energy.

The mechanism behind this proton transfer is the classic Grotthuss chain, where hydrogen bonding lets protons hop between water molecules very rapidly. But predicting how this mechanism affects a single line of molecules has been challenging. Now, a team led by Padmanabhan Balaram at the Indian Institute of Science in Bangalore has taken a first-hand look at how the molecules are configured, providing a useful template for future studies. 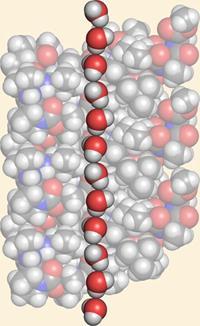 Cross-section of the peptide nanotube showing the entrapped water wire

’Our work is the first example of experimentally characterising a water wire inside a completely hydrophobic tube,’ Balaram told Chemistry World. ’This provides us with a precise  geometrical arrangement of the water molecules in single file - which can serve as a starting point for computer simulations of water in confined environments.’

Balaram’s team started the project after finding a peptide that crystallises in a doughnut shape, leaving a tube in the centre just wide enough for a line of water molecules. Importantly, the water molecules do not interact with the sides of the tube, giving a clean picture of how they would likely behave in nature.

This research may also aid studies into aquaporins - important proteins that regulate the flow of water through cells. However, although aquaporins do contain lines of single-file water, they are designed to not conduct protons, says David Marples, an expert on water channels at the University of Leeds, UK.

’Therefore this paper is likely to be more relevant in the field of nano-engineering,’ Marples continued, ’and also to structural biologists seeking to understand molecular mechanisms: such as the optimal spacing between water molecules and how they can be stabilised at that spacing.’