Swiss researchers have mapped the levels of arsenic and fluoride in groundwater throughout the world. They hope this new global picture will provide a starting point for planning future drinking water projects, and help to avoid water contamination in developing countries.

The team, led by Annette Johnson from the Swiss Federal Institute of Aquatic Science and Technology, combined geochemistry with statistics to create the maps. With existing measurements of fluoride and arsenic concentrations, along with data on ground conditions and climate, they were able to develop a model to estimate the concentrations of both elements.

Manouchehr Amini, one of the authors of the study explains that the maps are not definitive guides to global groundwater contamination, but provide an initial reference point, highlighting areas that should be tested before new wells are sunk. 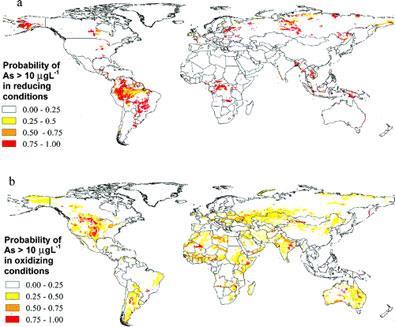 Modelled global probability of geogenic arsenic contamination in groundwater for (a) reducing groundwater conditions, and (b) high-pH/oxidizing conditions where arsenic is soluble in its oxidized state

Arsenic poisoning, which causes skin lesions and is linked to a number of cancers, is already an international health concern. In many countries in South Asia, including Bangladesh, India and Nepal, thousands of wells have been sunk in areas where arsenic concentrations are high, causing people to be poisoned by their own water supply.

Fluoride can prevent tooth decay, and is often added to drinking water in developed countries. But too much fluoride can lead to serious health problems including malformed bones and neurological disease.

The researchers created their mapping model using the known geochemical factors involved in arsenic and fluoride groundwater contamination. For fluoride, rock type, soil pH and humidity all influence groundwater levels. Arsenic concentrations are elevated when it is available in its more soluble oxidised or reduced forms. 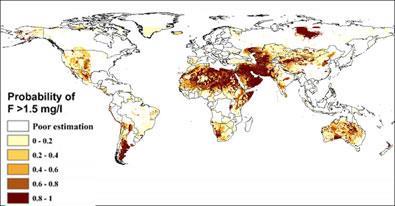 Using existing data, the team divided the globe into ’process regions’ with similar geochemical conditions, and set parameters for models of each of these regions that estimated arsenic and fluoride concentrations.

According to Andrew Meharg, an expert in arsenic contamination from the University of Aberdeen in the UK, the new maps could help to estimate the number of people at risk of arsenic poisoning and help in the planning of future drinking water projects.

’This is an excellent advance and gives new insights into predicting arsenic in groundwaters,’ he says. ’It’s crucially important to identify where these hotspots are worldwide and measurements must be carried out in the field out before any wells are sunk in areas that might be at risk.’