An enzyme known to act as a powerful antidote against organophosporous compounds has been expressed in the milk of transgenic goats, report researchers in Canada and the US. Organophosphorus compounds are recognised as potential chemical weapons agents.

The human enzyme butyrylcholinesterases (BChE) has long been investigated as a powerful antidote against organophosphorous compounds that might be used as chemical weapons. The goat-milk approach produces larger quantities of enzyme than can be obtained from human serum. 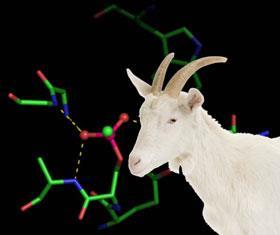 Yue-Jin Huang and colleagues at PharmAthene Canada, Montreal, first used guinea pigs to check whether they could get mammals to produce human BChE in their milk. After a successful trial, they stepped up to an economically realistic model. Goats are often used in the production of recombinant proteins, such as antibodies, because they are cheap to maintain and breed fast.

Huang’s team could produce up to five grams of the antidote per litre of goats’ milk. But the recombinant enzyme purified from this source did not show the characteristic tetramer assembly of the protein isolated from human serum, and did not carry the full set of sugar attachments (glycosylation pattern) necessary.

The researchers then attached polyethylene glycol to the protein, which resulted in a product that was comparable in its biological activity and half-life to the original human protein.

Patrick Masson, who investigates the connection between cholinesterases and organophosphate toxicity at CRSSA (Centre de Recherche des Services de Sant? des Arm?es) at Grenoble, France, welcomed the new development. ’This is an important piece of work which considerably improves the prophylaxis and the treatment of organophosphate poisoning,’ he told Chemistry World. ’It is not only of interest for the military, security staff, and medical personnel, but also for the general population who could become victims of attacks using such compounds,’ he said, recalling events on the Tokyo subway in 1995, when the organophosphate sarin was responsible for 12 deaths and 50 serious injuries.

’Injection of a dose of 200mg enzyme protects humans against up to five times the LD50 [dose required to kill half the members of a tested population] of the most potent nerve agents, such as soman and VX, with no side effects,’ said Masson. VX nerve gas (O-ethyl-S-[2(diisopropylamino)ethyl] methylphosphonothiolate) and soman (O-pinacolyl methylphosphonofluoridate) are used solely as chemical weapons.