Chinese scientists have used gold nanoparticles as ultrasensitive fluorescent probes to detect cancer biomarkers in human blood. The approach is so sensitive, according to researchers, that it outstrips current methods by several orders of magnitude and could also be employed in direct detection of viral or bacterial DNA.

Gold nanoparticles are promising probes for biomedical applications because they can be easily prepared and, unlike other fluorescent probes such as quantum dots or organic dyes, don’t burn out after long exposure to light.

In the new study, Jicun Ren and colleagues at Shanghai Jiaotong University in China apply the particles to detect carcinoembryonic antigen (CEA) and alpha foetal protein (AFP) - two important biomarkers in the diagnosis of various cancers, including liver, lung and breast cancer.

’Our method has extremely high sensitivity - two to five orders of magnitude more sensitive than the current homogeneous methods,’ says Ren. ’More importantly, our detection volume is less than one femtolitre and the sample requirement can easily be reduced to nanolitre level. Our method has the potential to become a high throughput detection platform for homogeneous immunoassay.’ 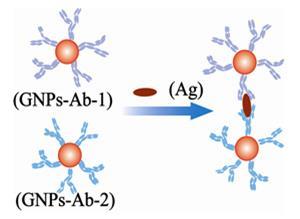 GNPs-Ab-1 and GNPs-Ab-2 represent the two types of gold nanoparticles bearing different antibodies, and Ag represents the CEA antigen. When mixed, a dimer is formed reducing the total number of nanoparticles in the sample

To measure biomarker levels, the researchers conjugated their gold nanoparticles to antibodies. For CEA, for example, they made two different types of nanoparticles, each one bearing a different antibody. When mixed together in a sample containing CEA, the biomarker bound both types at once, forming a dimer and decreasing the total number of nanoparticles in the sample. The change was detected by measuring the decrease in the number of photon bursts from the gold nanoparticles when they passed under a focused laser beam - the more CEA was present, the greater the decrease.

A similar experimental set-up has been used for over a decade for single-molecule fluorescence detection, notes Shuming Nie, who studies cancer nanotechnology at Emory University in the US. ’But an exciting finding is that bioconjugated colloidal gold nanoparticles can be counted with such a set-up, with signals that are dramatically more intense than organic dyes or quantum dots,’ he says.

Duncan Graham, a nanometrology expert at the University of Strathclyde, says Ren’s work shows impressive sensitivity across different formats - in the same study, the team link nanoparticles to gene fragments that bind specific DNA sequences and suggest the approach could be used to detect DNA in viruses and bacteria without polymerase chain reaction (PCR) amplification. But Graham believes sensitivity must be improved further before the need for PCR can be dispensed with altogether. ’This level of sensitivity has been reported before but hasn’t been sufficient to produce PCR-less DNA detection,’ he says.

According to Ren, the method could eventually be used in DNA assays similar to those currently used in microarray technology. ’The assay sensitivity allows detection of several tens of copies of DNA when the sample volume is about 10 nanolitres.’