Roger Kornberg, professor of structural biology at Stanford University, US, has been awarded the 2006 Nobel prize in chemistry for his work on the molecular basis of transcription. 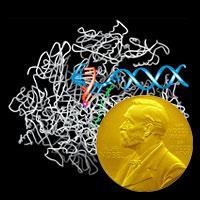 Transcription is the mechanism by which a DNA template is converted (transcribed) into an RNA message. The messenger RNA (mRNA) molecules go on to form a template for protein production.

’His work on transcription was outstanding,’ said Andrew Travers at the Medical Research Council’s Laboratory of Molecular Biology in Cambridge, UK, where  Kornberg worked from 1972-75. Alongside this, Kornberg made a substantial contribution to working out how DNA is packed into cells in the form of a protein-DNA complex called chromatin, and how chromatin is then opened up for transcription, added Travers. Kornberg could equally have shared a Nobel prize in the chromatin field, ’[but] for transcription his work stands on its own,’ he said.

Kornberg garnered plaudits in 2001 when he published the first ever snapshot of transcription as it occurs in the nucleus of a cell, imaging an RNA strand under construction. The picture showed a growing RNA strand (red, on the image above), the DNA that the strand was being copied from (blue), and the enzyme, RNA polymerase, which was doing the copying (white).

Kornberg had stopped transcription in mid-flow by missing out an essential molecular building block needed at a particular point in the RNA construction process. Once transcription reached that point, it came to a halt. Kornberg created crystals of those arrested molecules and determined the crystal structure of transcription in action at 3.3 ? resolution.

This was ’a far-reaching stride toward comprehending the enzymatic mechanism underlying transcription,’ wrote Aaron Klug of the Laboratory of Molecular Biology in Cambridge, UK, at the time. Klug himself was awarded the Nobel prize for chemistry in 1982  for his development of crystallographic electron microscopy and structural elucidation of biologically important nucleic acid-protein complexes.

Kornberg’s award follows this year’s Nobel prize in physiology or medicine, which went to the two discoverers of RNA interference - the process by which genes are silenced when specific sequences of mRNA are destroyed.

That makes it a bumper year for Stanford, where both Kornberg and RNAi pioneer, now fellow laureate, Andrew Fire  are based. It also makes an impressive crop of gongs for the Kornberg family - Roger Kornberg’s father, Arthur, won the 1959 Nobel prize in physiology or medicine for his work on the biological synthesis of RNA and DNA.

What do you think?
Add your comments at the Chemistry World blog

Andrew Fire and Craig Mello have won the Nobel prize in physiology or medicine for their discovery of RNA interference.