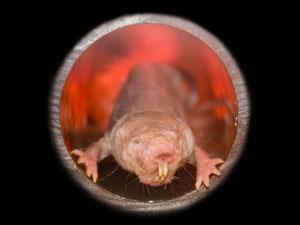 Naked mole rats don't get cancer. Scientists are homing in on why

US researchers have discovered a biological mechanism that contributes to the remarkable cancer resistance of naked mole rats.1 Understanding why naked mole rats don’t get cancer could lead to new cancer prevention and treatment strategies for humans.

Naked mole rats are unusual in many ways, not least for their bald appearance and a life spent underground living in colonies similar in structure to ants. But perhaps most extraordinary of all is that they can live for over 30 years – a house mouse only lives for four years – and they never seem to get cancer.

In 2009, the same researchers at the University of Rochester, New York, identified a gene in naked mole rats called p16 which gives them a unique hypersensitivity to a cell growth mechanism called contact inhibition.2 Contact inhibition is a natural check on cancer that keeps cell division under control by halting division when too many cells are jostling for space.

On top of regular contact inhibition observed in other animals, the p16 gene provides naked mole rats with an early contact inhibition (ECI) mechanism that causes cells to stop dividing at much lower densities, compared with mouse cells. It is believed this could be the key to the naked mole rat's cancer resistance. However, the signals controlling ECI remained unknown.

Now, the group led by Vera Gorbunova and Andrei Seluanov at Rochester, and colleagues at other institutions, have discovered that ECI is triggered in naked mole rats when their cells secrete a very high molecular mass form of a molecule called hyaluronan.

Hyaluronan is a carbohydrate polymer that is generally known for being a major component of the extracellular matrix – the part of animal tissue that provides structural support to cells. But the team discovered that the molecular mass of hyaluronan in naked mole rats is over five times that in mice and humans.

The discovery happened by chance when the team were culturing naked mole rat fibroblasts – the cells responsible for synthesising the extracellular matrix – and noticed the culture medium became unusually viscous after a few days.

'Once we identified the gooey molecule as hyaluronan, we attempted to turn naked mole rat cells into tumour cells, which was unsuccessful,’ explains Gorbunova. ‘But when treated with an enzyme to break down hyaluronan, cells lost ECI and tumours formed, which immediately allowed us to connect the viscosity to cancer resistance.’

'Although it is likely that high molecular mass hyaluronan evolved to provide a better quality connective tissues particularly in the skin of these furless rodents, its potential novel use in facilitating cancer resistance in the naked mole rat is inherently intriguing and most unexpected,' says Rochelle Buffenstein, a naked mole rat expert at the University of Texas Health Science Center in San Antonio, US.

Experiments revealed that the naked mole rat overexpresses an enzyme called HAS2 synthase, which is responsible for synthesising high molecular weight hyaluronan. By comparing the naked mole rat Has2 gene with the same one in other mammals, the team discovered the difference comes down to two amino acid changes.

What's more, they found that activity of hyaluronan-degrading enzymes, which regulate hyaluronan levels, is much lower in naked mole rats cells than in human and mouse cells. Therefore, accumulation of high molecular mass hyaluronan in naked mole rats seems to also be due to slower degradation, as well as more robust synthesis.

Gorbunova says they are now planning to test whether cells and tissues of other mammals will respond to high molecular mass hyaluronan in the same way as naked mole rat cells do. 'We are very optimistic that this mechanism can be "borrowed" from naked mole rats to benefit humans,' says Gorbunova. 'For example we could develop small molecule inhibitors of the enzyme that breaks down high molecular mass hyaluronan.'

'This is really cool work. It has been a big mystery how naked mole rats suppress cancer,' says Carlo Maley, an expert in the evolution of cancer at the University of California in San Francisco, US. 'It is interesting that the answer seems to be a component of the microenvironment. I think the next questions are: one, is a mouse engineered to have the naked mole rat's hyaluronan more cancer resistant? And two, is there a safe way of modifying hyaluronan in humans to make us more cancer resistant and what would be the trade-off?'