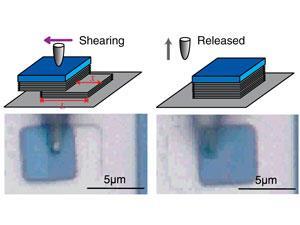 Scientists in China and Australia have used graphite to reduce the friction between two contact surfaces to an all time low. The work establishes the feasibility of applications for this phenomenon in microscale devices and reducing energy consumption.

Friction is something of a sticky engineering problem; surfaces in contact with one  another bump and grind together, causing stress and wear. 'Something like a third of all energy in moving devices is wasted on friction,' says Quanshui Zheng at Tsinghua University in Beijing. Zheng and his colleagues are trying to mitigate this with an atomic-scale structural mismatch between surfaces, which gives rise to 'superlubricity'. Francois Grey, a member of Zheng's team, likens the phenomenon to stacked egg boxes: 'When the egg boxes are aligned, they stick inside one another but if they're out of alignment, they don't, and you can easily slide them over one another.' Graphite's layered-lattice - in some ways analogous to stacks of egg cartons - makes it a perfect candidate with which to investigate the phenomenon.

In their experiment, the team lithographically constructed micron-size graphite blocks and used a tungsten microtip to apply a force across the surface of a block, causing a flake to shear off. When the sheared flake was released, the energetic burden of the newly exposed surfaces pushed the two parts back together. Analysing the forces governing these events showed that the new surfaces slip over one another with almost no friction. The team also noted that if the sheared flake was rotated, at certain points the two surfaces lock together again. These 'lock-ins' occur at 60° intervals, describing the hexagonal symmetry of the graphite lattice, and neatly highlighting the egg carton analogy.

Since superlubricity was first proposed in 1990, several groups have observed the effect but, until now, it was regarded as a curiosity. 'In the past the effect was studied over a few nanometers and in ultra-high vacuum,' says Grey. 'The big change here is the scale on which we're seeing this and the fact that it's done in ambient conditions.'

The scale of the effect is perhaps the most striking aspect of the work. 'In fact,' says Grey, 'some people predicted theoretically that it wouldn't be possible on this scale'. Martin Dienwiebel at Fraunhofer IWM, Germany, was among those voices. 'I've been very sceptical,' says Dienwiebel. 'We had ideas why it wouldn't work and this shows that some of those ideas were wrong. I think it's very good.'

Joost Frenken, at Leiden University in the Netherlands, praises the ingenious simplicity of the team's approach. 'It's a cleverly thought out experiment,' says Frenken, 'and a very courageous one too - I would never have thought of it. They are in the macroscopic regime: that immediately brings it from academic to practical interest.'

Grey says they believe that this effect should be apparent at even larger scales, and in other layered materials, limited only by the sample's crystallinity. Frenken agrees: 'In principle, it should be possible to make a square metre of material that would behave like this.'

Grey even suggests that it should also be feasible to eliminate the lock-in effect, allowing surfaces to slide and rotate with complete freedom. 'We're quite excited by that prospect. Instead of going to huge lengths to avoid contact between surfaces, you would exploit the fact that they can have ultralow friction precisely by being in contact.'