Scientists in the US have successfully used a template directed protocol to synthesise two topological isomers of a handcuff catenane. Handcuff catenanes are mechanically interlocked molecules where two covalently bound rings, called the ditopic host, are interlocked by a third ring threaded through both rings of the ditopic host. Only three other mechanically interlocked molecules with the handcuff topology have been reported before – they are very difficult to synthesise.

Previous handcuff catenanes have all been achiral and have only demonstrated one way to thread the third ring through the diptopic host. The handcuff catenane made by Fraser Stoddart and colleagues at Northwestern University has two distinctive topologies – it is impossible for one to be converted into the other, unless covalent bonds are broken and then re-made. The stereochemistry demonstrated by Stoddart’s handcuff catenanes is interesting because as well as being topologically chiral they also display Euclidian chirality. 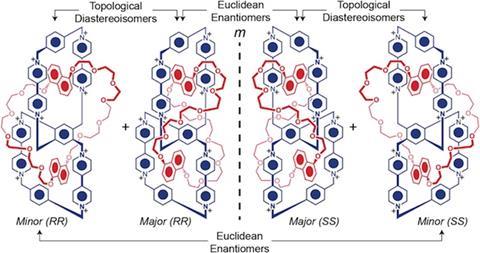 A template directed synthesis between the p-electron-rich bis-1,5-dioxynaphtho[50]crown-14 and the precursors of two fused p-electron-deficient cyclobis(paraquat-p-phenylene) cyclophanes was used to make the topologically complex molecules. The handcuff catenanes could have future applications in molecular switches.