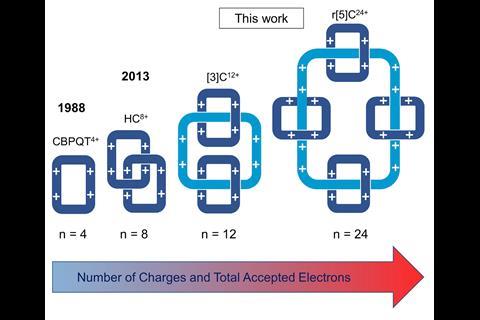 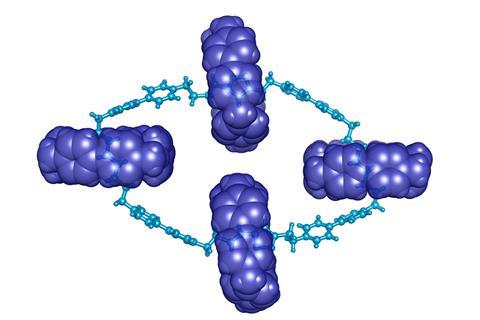 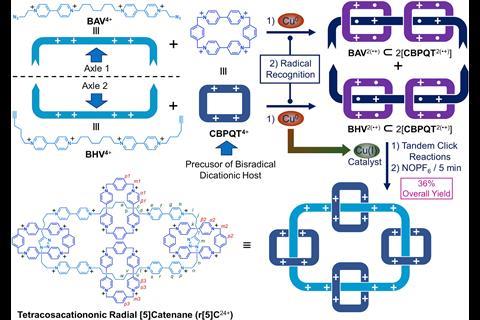 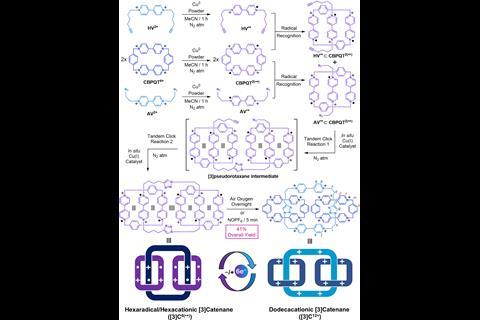 The team also synthesised a +12 catenane

A molecular necklace – four rings threaded onto one larger ring – combines 24 positive charges within a single compound, making it the most highly charged mechanically interlocked structure ever made.1 The previous record-holding catenane2 carried only eight positive charges.

Despite the molecule’s extraordinary number of mutually repellent charges, the team led by 2016 Nobel prize winner Fraser Stoddart from Northwestern University, US, made the catenane in 36% yield over multiple steps, using radical recognition. Interaction between planar π-radicals, which is about as strong as a hydrogen bond, first threads two rings each onto two linear axles. A click reaction then stiches the axles together to form a large ring that is finally oxidised to form the tetracosacationic catenane.

The team also synthesised a smaller +12 catenane comprising two rings threaded onto one larger ring. At 7.3 positive charges per nm3, the compound has the highest charge density of any interlocked molecule.

X-ray structure analysis revealed that there is barely any space in the middle of the larger ring. The smaller ring’s benzene units are separated by only 3.2Å – closer than the average distance for aromatic stacking interactions (3.7Å).

Both the +12 and the +24 catenane can be reversibly switched to their half-reduced radical state – a +6 hexaradical and a +12 dodecaradical, respectively – either by chemical or electrochemical means. This also alters their topology: in its fully oxidised state, the +12 catenane’s smaller rings sit around the larger ring’s triazole linkers but move to its bipyridine sections when reduced.

Stoddard’s team thinks supercharged molecules might find applications in energy storage technologies such as redox flow batteries. Catenanes and other mechanically interlocked structures can also serve as molecular machines, such as as ribosome-like molecular assemblers.