UK researchers have successfully made microthreads from polymers containing living cells, using a technique called electrospinning. These biologically active threads could be formed into medical scaffolds, to deliver cells directly to tissue and promote healing.

Suwan Jayasinghe at University College London, UK, who led the study, told Chemistry World that the technique could be used to make both random and specified scaffold arrangements of threads that would be biologically active. ’The cells are not affected or damaged by the voltage,’ he said. ’This means that we can make biological scaffolds from these threads that will hold living cells in place and allow them to interact with the surrounding organisms.’ 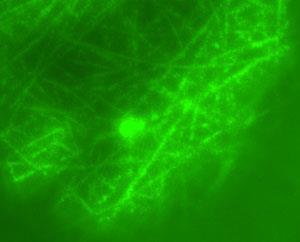 According to Jayasinghe, the polymer threads could deliver cells to damaged tissue and hold them in place to promote healing. They could also deliver stem cells for regenerative medicine, he suggests. ’Imagine a dentist rebuilding a tooth,’ said Jayasinghe. ’Polymers containing stem cells could be sprayed directly onto the tooth and the scaffold of threads would fix the cells in place so that they could proliferate exactly where they are needed.’

Electrospinning has long been used to make nanoscale fibres and mats but Jayasinghe’s group are the first to incorporate living cells into the technique. With concerns about the unknown effects of free nanoparticles continuing to plague the nanomedical field (see ’UK dragging its heels on nanotechnology’), Jayasinghe claims that ’spraying’ these threads directly onto damaged tissue is a 100 per cent biocompatible, risk-free alternative to the use of such nanoparticles to as treatment delivery systems.

’If a person injured their hand, we could take cells from the person’s other hand to heal the injury,’ he added. ’Once they are applied, the polymers degrade and the cells would live happily ever after.’