HIV vaccines 'will not work'

Just days after US drug firm Merck revealed its leading HIV vaccine candidate had flopped in clinical trials, a leading immunologist has predicted that many other vaccines in the pipeline will also fail because their design is similarly flawed.

Kendall A Smith from Cornell University in New York, US, told Chemistry World that all HIV vaccines currently in clinical trials will not work because they cannot replicate inside the body.

Many, including Merck’s, use an inactivated virus, or viral vector, to transport HIV genes. ’Because these viruses can’t replicate, they cannot produce enough HIV genetic material to generate a powerful immune response,’ Smith said. ’Unfortunately, all of the vaccines currently in clinical trials use non-replicating vectors.’

Merck’s vaccine V520, which was in the middle of phase II clinical trials in South Africa when it was scrapped, is made from an inactivated common cold virus with three HIV genes patched into its DNA.

Classic vaccines use live, attenuated viruses, but this is impossible with HIV because the virus is constantly mutating. Instead, hopes have been pinned on using genes from ’conserved’ regions of the virus that remain the same in all viral strains. The aim is to stimulate the body to respond to these HIV genes by producing T cells - immune cells that destroy foreign antigens, including viruses and bacterial infections.

’This approach cannot prevent infection but it can prevent disease by allowing the body to control the virus with immune cells,’ explained Smith. He says vaccine designers have focused on genetic engineering and overlooked the basic immunological need to provide a large enough dose to generate a powerful response. ’We’ve now lost a decade of research to these vaccines and we’re in the pipeline to lose two to three more,’ he said.

In a review article published in 2005, Smith criticised Merck’s approach after the company presented what he described as ’almost undetectable levels of immune response’ during a Keystone Symposia meeting that was held in Banff, Canada1. ’It is not clear why Merck is pursuing this line of investigation. Evidently there is no one at Merck willing to stand up and say that the Emperor has no clothes,’ he wrote.

But Merck is actively pursuing the development of vaccines based on non-replicating viral vectors, and has several in early clinical trials. Mark Feinberg, Merck’s vice-president of policy, public health and medical affairs told Chemistry World that it was impossible to draw such firm conclusions or to dismiss these vaccines at such an early stage. ’We have seen a robust immune response to these vaccines in humans,’ he said. ’My view is that it isn’t the vector that is the sole cause of the vaccine’s failure - it is much more complex than that.’ 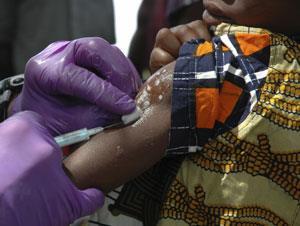 He continued: ’HIV is probably the most difficult pathogen that science has ever attempted to develop a vaccine for. Our first priority now is to analyse the data from our field study and share them as widely as possible.’

One group, led by Marjorie Robert-Guroff from the National Cancer Institute in Maryland, US is developing a vaccine using a replicating virus called Ad4 that has been previously used as an oral vaccine for the US military. Robert-Guroff says that this is at least two years away from clinical trials, but it has so far produced a more potent immune response in pre-clinical studies than non-replicating virus-based vaccines. ’It is more persistent and also induces cytokines and other co-stimulatory molecules of the immune system, just as a natural infection would,’ she explained.

But 10 years on from Bill Clinton’s promise of an HIV vaccine ’within a decade’, the outlook now seems much less optimistic. ’It is impossible to make predictions,’ said Feinberg. ’The only true test for any of these potential vaccines is how they perform in clinical trials.’